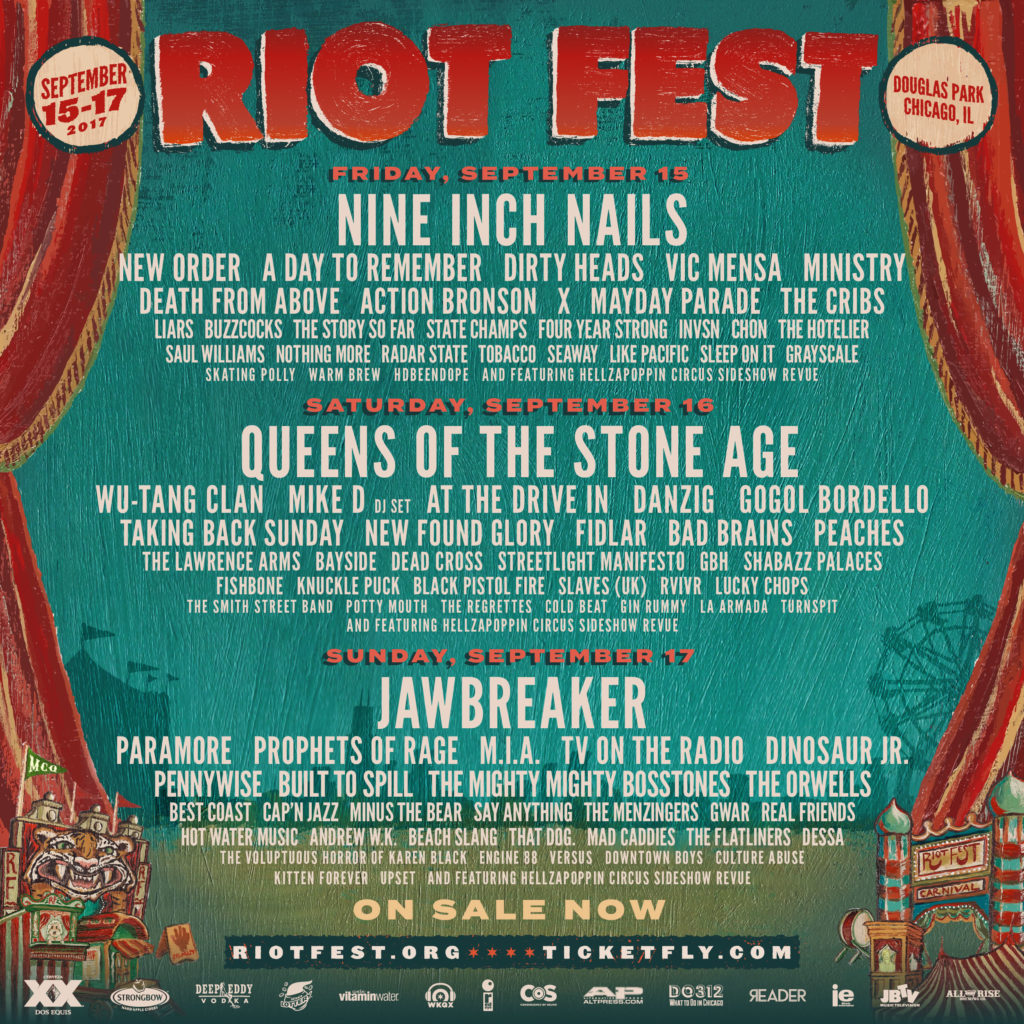 Chicago’s South-Side Douglas Park welcomes back Riot Fest on September 15-17th in what will be its only festival date this summer. Headliners include a much anticipated Chicago return of the industrialist pioneer Nine Inch nails on Friday. Saturday contains high-energy rockers Queens of the Stone Age and Sunday is the reunion of influential underground punk band Jawbreaker. Organizers nixed the Toronto date in 2016 due to logistical issues and cancelled the Denver stop this year following the sudden passing of Sean P. McKeough, one of the main organizers of the festival.

With heavy rockers completely taking over most of the headlining slots, it’s easy to overlook the scholastic flows and steady beats of their rapping, beat-making counterparts. While Riot Fest can mostly be considered a “Rock Festival,” it has also done an outstanding job in recognizing and highlighting true Hip-Hop talent. Here are 10 acts that will be leaning on their Hip-Hop expertise at this year’s festival:

As a member of the psychedelic/electronic outfit Black Moth Super Rainbow it should come as no surprise that Tobacco provides a unique journey through the Hip-Hop soundwaves. Weird noises and effect-laden vocals are common but his music still contains a certain mystical draw. Incorporating analog synths and tape machinery into his production, Tobacco blends electro, Hip-Hop and experimental rock into something both rockers and rappers can get down with. Tobacco will be starting off the weekend on Friday. SoundCloud

More of a poetic force than a rapper, Saul Williams is a widely talented singer-songwriter, musician, slam poet, writer, and actor. While Williams has a handful of studio albums, he might be more respected for his written works which have been published in the New York Times and Esquire and has been performed at Sydney Opera House, The Louvre and the White House to name a few. A profound wordsmith, be ready for a lyrical onslaught by Williams at his Friday set at Riot Fest this year. SoundCloud

Armed with a deep and raspy voice reminiscent of a young Jeezy except with a breathtaking almost continuous flow. Gin Rummy is one of the best kept secrets in rap music. While there is little information on this East Coast emcee, his debut “The L Crooked I : Chronicles of Rummy” is a certain head knocker. His classic Hip-Hop beats supporting sharp wordplay is sure to draw a crowd on Saturday of the festival. SoundCloud

A Californian Hip-Hip collective, Warm Brew is a trio made up of Ray Wright, Manu Li, Serk Spliff who rap about getting high, drinking beers and those sunny Cali vibes. These self-proclaimed ‘Ghetto Beach Boyz’ debut album came with critical success thanks to great production and an undeniable flow chemistry between the members. Warm Brew will no doubt be looking to quench the thirst of the Riot Fest patrons on Friday. SoundCloud

Twin City beauty, Dessa is the female spice in Minneapolis emcee collective Doomtree as well as being the CEO of Doomtree Records. Even after juggling rapping, singing, producing, writing and being a record executive, she still has time for a solo project. Her solo work is an electronically backed slew of spoken word rhymes. Speaking in a raw and beautiful tone, Dessa is making her mark as a female powerhouse in the genre. See Dessa ring out under the Sunday sky this year at Riot Fest. SoundCloud

At first listen, HDBeenDope could be mistaken for Kendrick Lamar’s little brother. Or maybe even Chance’s cousin. With incredibly smart lyricism and impeccable delivery, HDBeenDope is sure get noticed Friday at this year’s festival as he makes his Chicago debut. This Brooklyn based emcee will be bringing a dose of fresh young rap talent to this year’s musical collection. SoundCloud

The first Hip-Hip group that signed with indie label Sub Pop, Shabazz Palaces let their music speak for itself. With not much marketing behind the group, Shabazz has become a pioneer for the underground Hip-Hop sound. Founded by former Digable Planets member Ishmael “Butterfly” Butler, Shabazz is a smooth playground filled with instrumental samples and forward-thinking wordplay. Catch Shabazz Palaces Saturday at Riot Fest. SoundCloud

One third of the revolutionary Hip-Hop trio Beastie Boys, Mike D has been listed on Saturday for a DJ set at this year’s festival. After the Beastie’s hiatus following the passing of founding member Adam “MCA” Yauch, Mike D has kept himself busy producing and hosting a bi-weekly radio show on Beats1 called the Echo Chamber. There is no doubt Mike D will be rapping some of his most famous rhymes from his former trio’s heyday. SoundCloud

Making their triumphant return to Riot Fest on Saturday is the shaolin stylings of Wu-Tang Clan. Perhaps one of the most influential collectives in the history of Hip-Hop, Wu-Tang always delivers a high energy performance accompanied by the crowd echoing almost every word. Just as much a part of the underground resistance as their punk counterparts, this is a can’t miss set of the weekend. SoundCloud

What do you get when you take three 90’s groups who are pissed at the government and want the world to know about it? The answer is Prophets of Rage: A rap/rock supergroup made up from members of Rage Against the Machine, Cypress Hill and Public Enemy. The socially conscious and anti-establishment focused band formed in 2016 and has been tearing up protest rallies and government conventions ever since. Be a part of the Prophet of Rage Nation this Sunday at Riot Fest. SoundCloud

Normally the word Riot incites feelings of anxiety, lawlessness and absolute madness. However, when referring to Riot Fest, the term ignites thoughts of epic headliners, unthinkable reunions, and full album performances in the vein of rock, punk, rap and alternative rock. By consistently staying true to their musical format while adding a sideshow circus twist has made Riot Fest a major festival must every year.