For his latest album Sunken Treasures, Secret Recipe serves up a tantalizing 4-track meal for our ears and minds to devour. Each track brings new flavor and a unique blending of genres to the table. With a nod to classic genres such as dubstep and house (most notably on “Freeze Flanks”), Secret Recipe does a fantastic job of pushing the sonic boundaries of bass music while still incorporating his one-of-a-kind sparkly sounds.

You’ll hear those sounds and smile – because Secret Recipe has not lost his signature magical style that humbly began under the moniker Intellitard. Don’t know this whimsical style I’m talking about? Just think about what it would sound like if a psychedelic rabbit was being charmed out an acid-soaked hat. And if that statement isn’t intriguing enough, just start listening to Sunken Treasure’s beginning track “Modern Medicine”.This track starts off the album just right, with an arrhythmic, abstract beginning that slowly descends into intoxicating, driving bass with plenty of weird whizzes and some of that sweet squish we all know and love. “Modern Medicine” is sure to cure any of your ailments by dosing you up with smooth and sultry vocal samples, plenty of bass-heavy glitch beats and just the right amount of glittery synths. 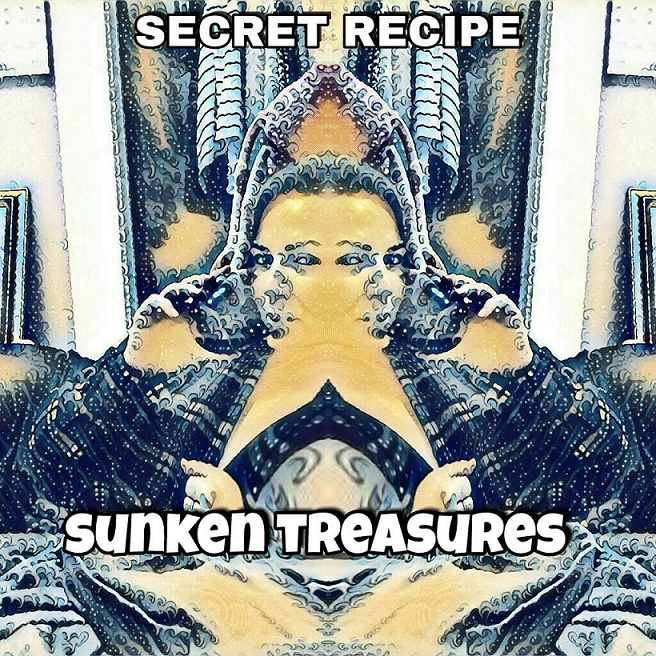 The second track “Freeze Flanks” takes the glittery synths and shimmering bass to the next level. The classic, whooshing build-up to the bass drop releases into a torrent of quick rhythmic bass kicks and abstract squeaks with just the right amount of sexy synths. Then the build-up starts again, this time dropping all of us bass freaks into a whirlpool of kaleidoscopic sounds that only lets up by the house grooves that push their way in, woven in a seemingly random yet artistic manner.

Swimming on from the whirlpool of psychedelic madness, Secret Recipe leads us into an underwater cave. Bubbling sounds are everywhere in this third track “Nautical Robotics”, accompanied by noises that almost make your skin crawl. With the most quintessential dubstep build-up, SR once again hits it with the glitch. This time the glitch is underwater as the sounds sink below the surface and reach some of the lowest depths of steeze. It’s crazy that somehow Secret Recipe has the ability to make me feel like I’m simultaneously being catapulted into underwater space while also diving headfirst into a rabbit hole.

And speaking of rabbit holes, Secret Recipe casually tosses us into one on the last track “Tomorrow’s Artifacts”. This rabbit hole is brimming with super dank half-time bass and brings back those sultry vocals from the first track. The song excavates deep into space, bringing us out only for brief seconds at a time with a ethereal guitar or perfectly timed hi-hat tremors. There’s barely time to breathe amongst the Dimond Saints-esque horns and droplets echoing in and out of your eardrums…and then! “Tomorrow’s Artifacts” abruptly ends, leaving the listener wanting more. And of course you want more bass, so listen to the full album below and catch Secret Recipe spicing up the dance floor at Pirate Party, Infrasound Festival, Enchanted Forest , Stilldream and many other gatherings throughout the year.