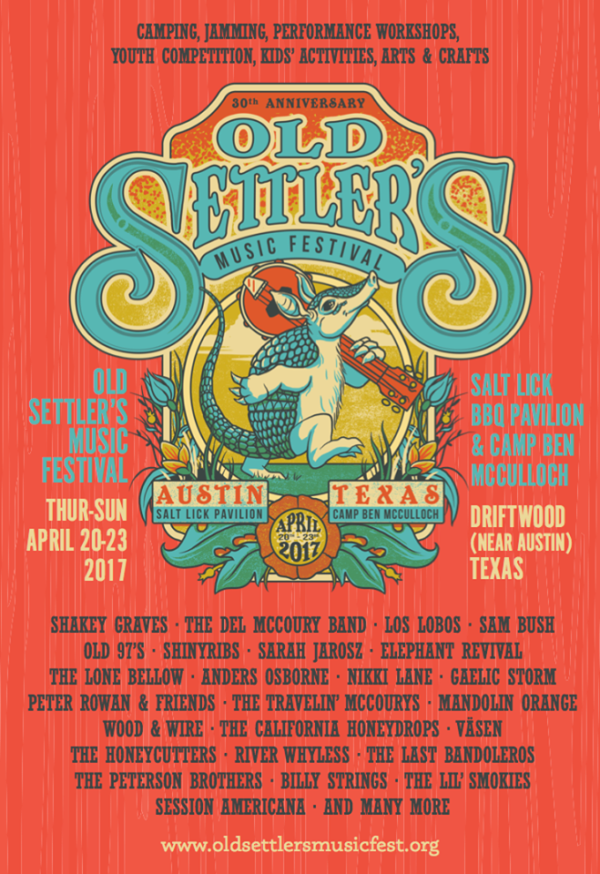 Old Settlers Music Festival celebrated 30 years of good times with a weekend unlike anything I’ve ever experienced. Old Settlers offers a gourmet samplings of the best singer songwriters, jam bands, bluegrass and Americana you can find – bringing in Grammy winning Los Lobos from LA to headline along with locally grown Austin heroes like Shakey Graves. The crowd is there in droves but you can always find a spot on the lawn to set up a chair. Unlike other festivals, no one will give you attitude as you navigate through people from the back right up to the front row. You don’t need to camp out for the set before your favorite band either, you can walk up when they start and see everything perfectly. Old Settlers draws a crowd that doesn’t act to impress anyone – they’re very real and authentic people, many of them have been coming religiously since the festival’s inception 30 years ago.

That’s the magic of Old Settlers – it has an inclusive and intimate vibe where people can come into their own. The musicians are in the crowd when they’re done playing, unless they’re on stage as guest performers. Nearly every band had friends come up and join them for a jam and they had some of the best jams I’ve ever had the pleasure to experience. Old Settlers is an event for the whole family too, friends my age have been coming since they were tikes. They source local food and crafts and offer up a selection of music you won’t find anywhere else.

Here are my top picks. 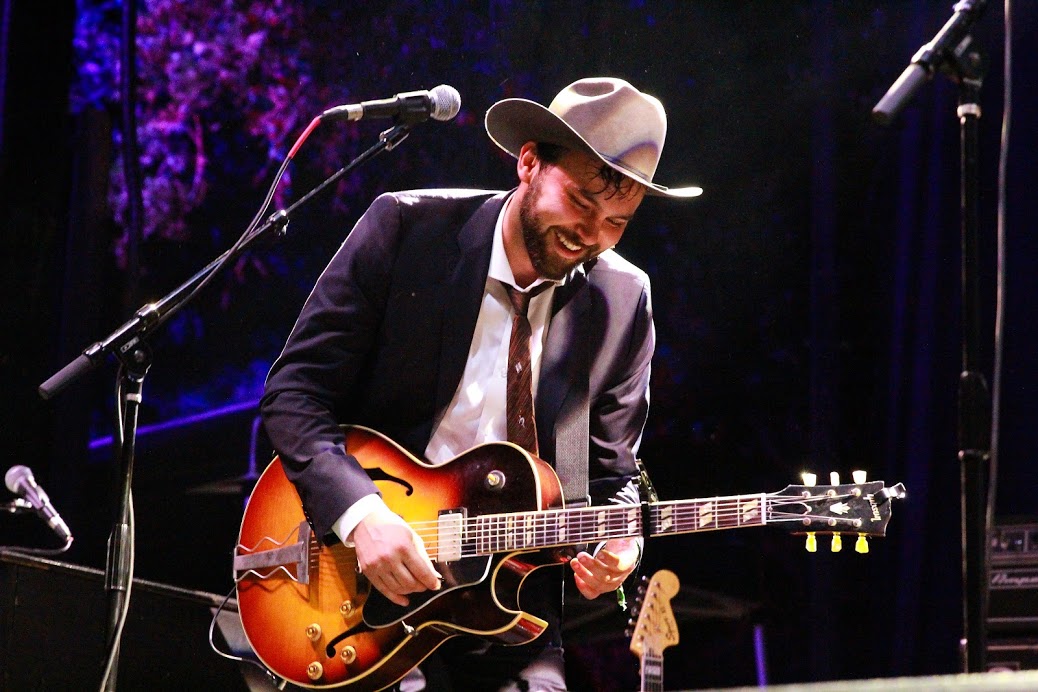 This year’s Old Settlers was a grand celebration of it’s greatest creation – singer songwriter Shakey Graves. When Shakey was a young, broke musician he snuck into the show’s campground in the trunk of his friend’s Nissan Maxima. Without the credentials to actually get into the show he spent the weekend playing guitar around campsites, firelight on his fingers. The following year he volunteered with the trash crew to see all of the world class acts. Now, ten years out from his trunk days, he’s headlining.

Shakey said he learned how to tune a guitar at Old Settlers and then, in one of the most impressive feats of musicianship I’ve ever seen, turned the slow tuning of his guitar into a full blown musical number with the most enthusiastic clapping I’ve ever heard as percussion. Only Shakey could turn the tuning of a guitar into something so atmospheric it conjured images of mist hanging low over a graveyard. 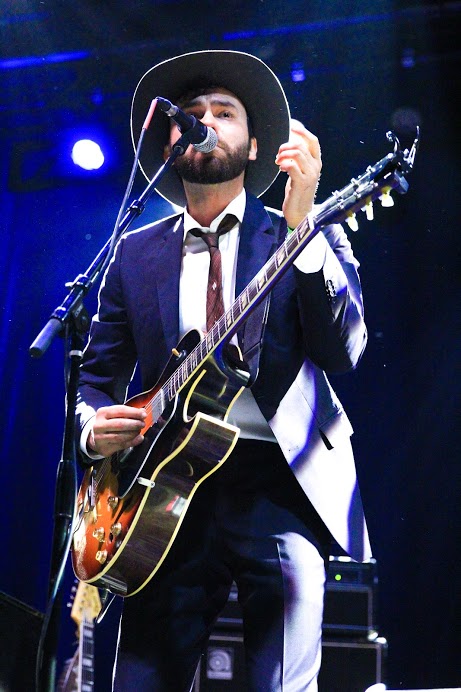 Shakey is the wild west through the Coen Brother’s lens. His voice is a howl, a growl, a shiver, a shake. . Though most of his music occupies a ethereal place of ghost rock when Shakey kicks it into full overdrive it’s like a stampede across the plush plains.

Bluegrass, like rock and roll, is probably younger than your grandparents. Peter Rowan was conceived when the genre was still embryonic and Rowan was instrumental in the way the music bloomed into maturity. For many young hippies, the first time they EVER heard bluegrass was when they heard The Old and the In Way – the band Grateful Dead frontman Jerry Garcia formed with Rowan in the 70’s. Before joining forces with the legions of the Dead his band Earth Opera regularly opened for The Doors. 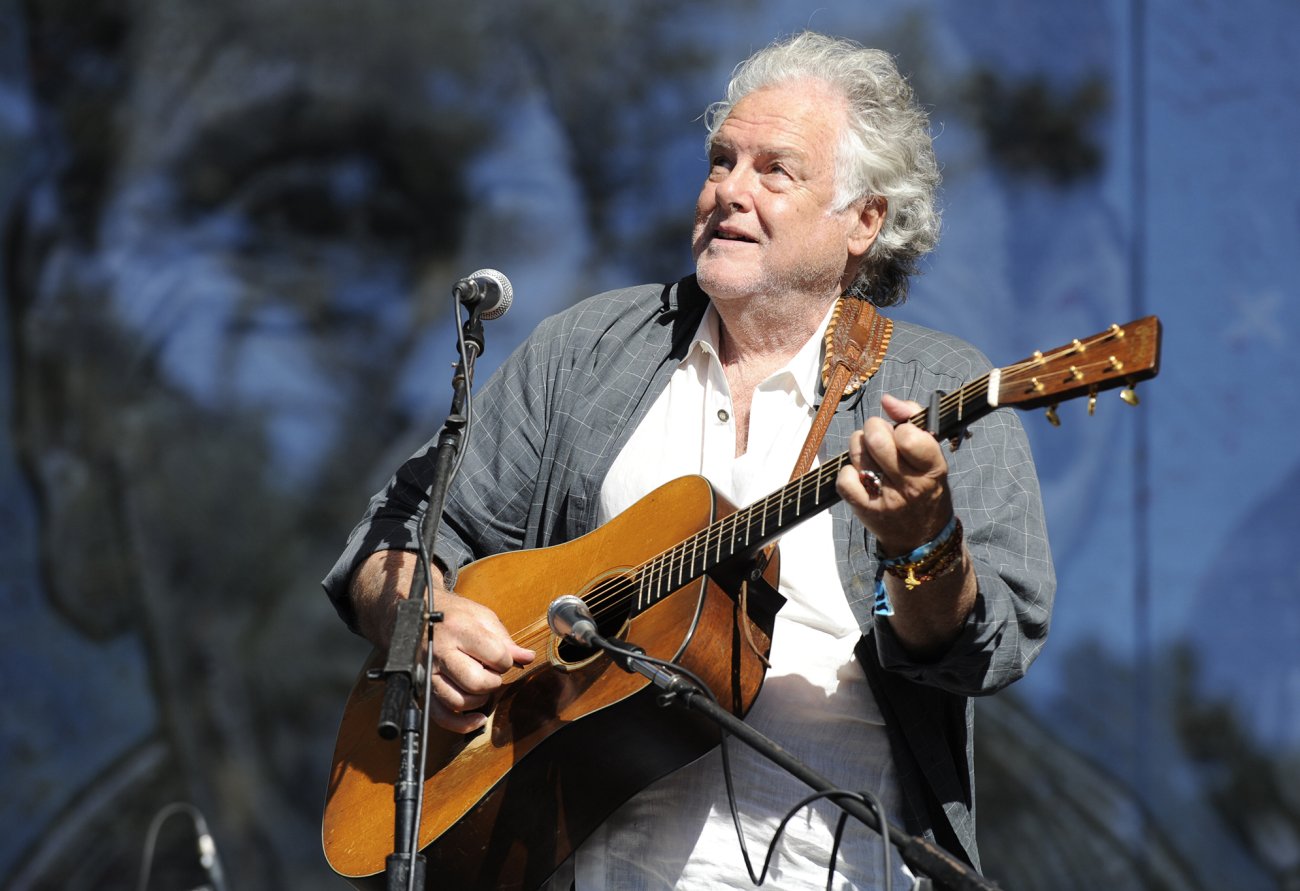 Rowan’s songs are like an entire village coming out to dance in jubilation. He commands his stage in a way even the headliners can only dream of. I felt like I was watching a musical legend who had, for whatever reason, never been written into the mythos of mainstream America. The music had so many layers full of so much nostalgia, every measure told a story of what is lost and what is gained when you are driven by a traveling soul. For some of his songs a light touch of reggae rhythms enter into play, with an emphasis on off beats, but his band always kept it’s bluegrass feel.

Rowan’s yodeling channeled the spirits that haunt America. There is no doubt in my mind that Alex Ebert of Edward Sharpe and the Magnetic Zeroes stole moves from Rowan. It’s a shame more people aren’t familiar with this still living legend.

Anders is from Sweden originally but was seduced by the far away sounds of America. At the young age of sixteen Anders left his home, hitching and busking across the world until he landed in New Orleans. Mixing elements of music from home and music from here, Osborne plays what I can only call Railroad Rock – a progressive take on the classic blues rock formula. His band had extended jam after extended jam with deep bluesy grooves where the grass can grow. 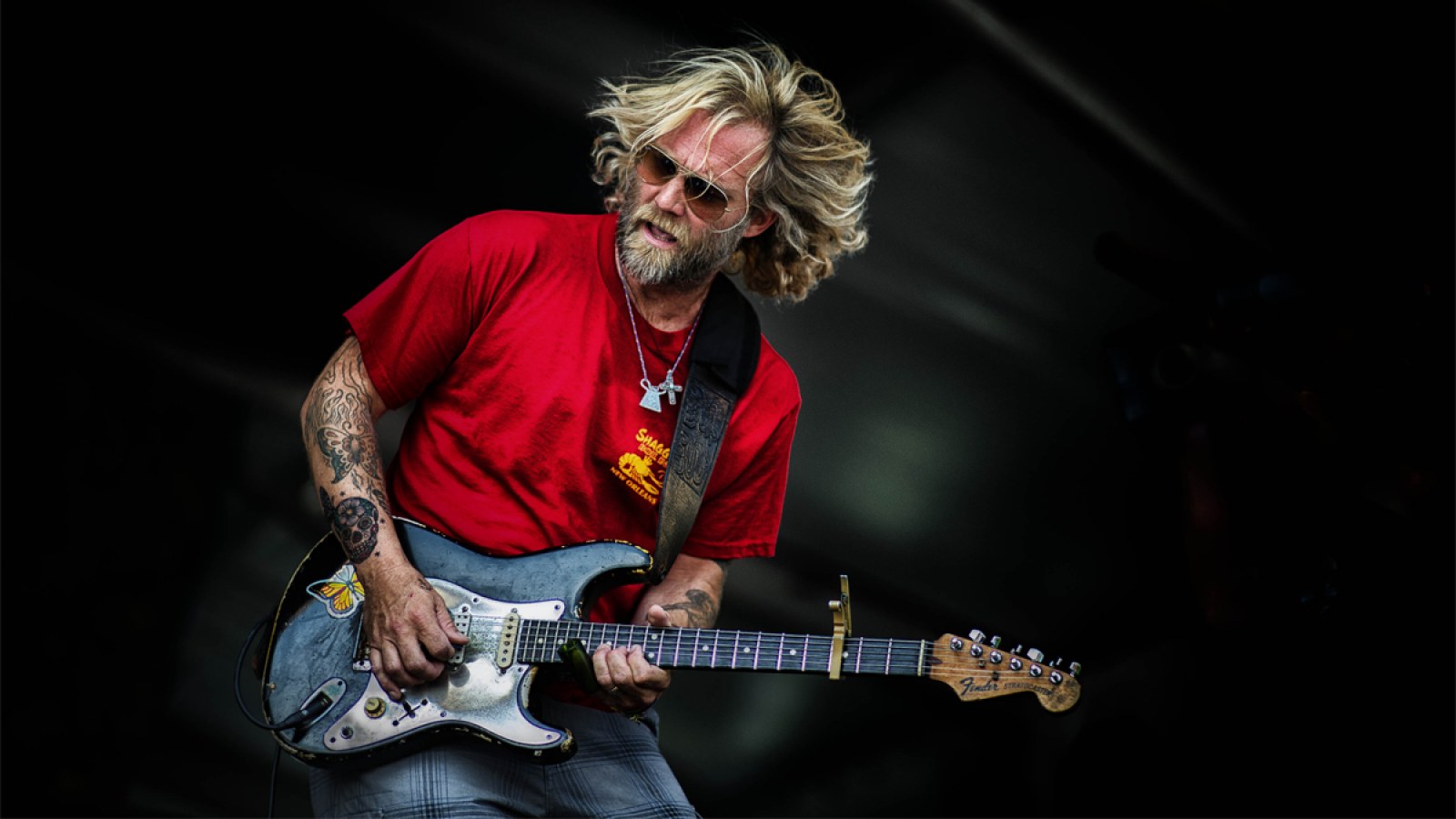 Osborne won me over with his music but what sealed the deal in being a bonafide badass was how he stuck up for his band. Old Settlers has predominantly white musicians, Anders was the third band I saw and the first with a black member – guitarist Eric McFadden. They are a New Orleans blues band after all. About halfway through the set Anders went up to the mic and said, “Hey can we get some light on the drummer – you can’t leave a black drummer in the dark!” The floodlights came down and revealed the, up until that point, invisible drummer Brady Blade. Anders kept talking, furious, “This is white privilege!” Not only was it badass that he cared about his band, and had the balls to call out the lighting guy, but at the end of the set he let everyone know he wasn’t about to drop it when he walked off stage. Anders thanked the sound man by name and then he said “Hey, can we get a round of applause for the lighting guy. What was that guy’s name again, I forget, someone’s gonna have to pass it up to me.”

Someone’s ass is getting fired. 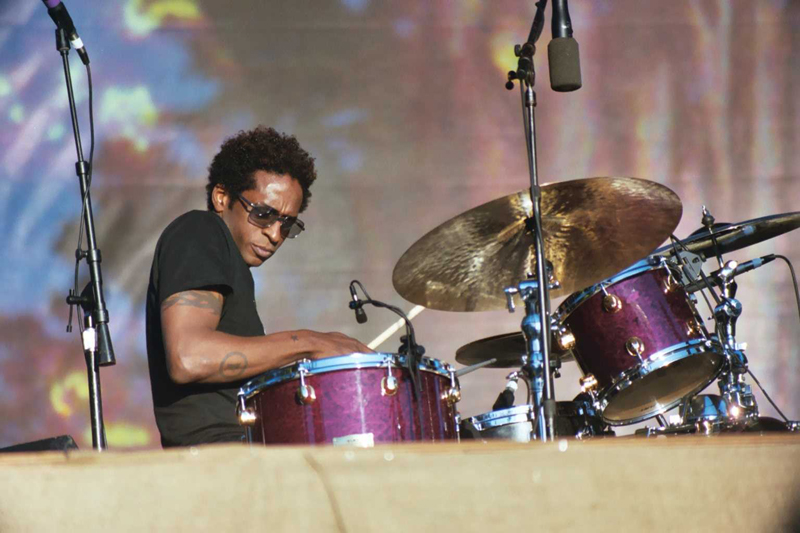 Brothers Willy and Cody Braun were homeschooled in rural Idaho by their musician parents. When they were kids, legendary Austin musician Robert Earl Keen came to live with them and convinced them to move out to Austin, where he took them under his wing. The result of a childhood steeped in music and the perfect storm of this tutelage is Reckless Kelly – a band of outlaws who can move from country to rock to bluegrass in a matter of minutes. 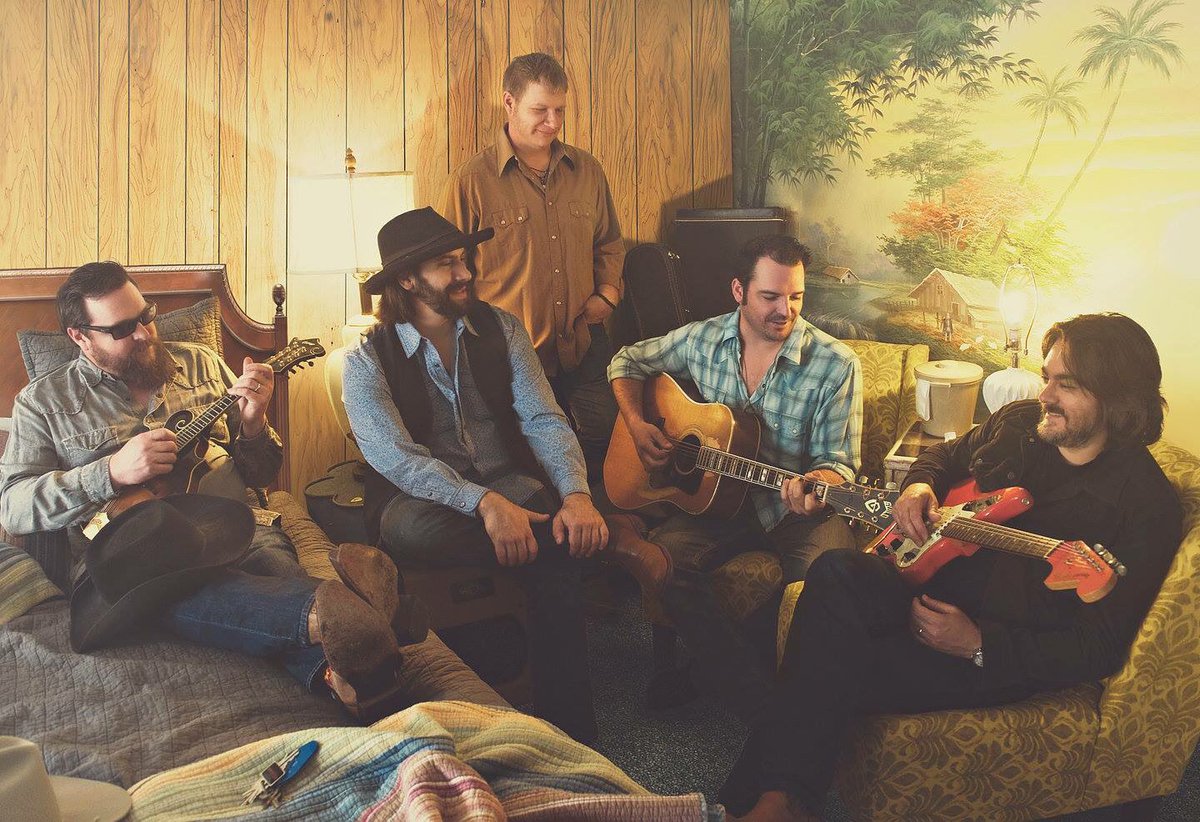 Reckless Kelly has a hard rock edge which cuts through its country vibe like an eagle taking flight. Precise guitar work two steps though their down home grooves.  Cody Braun specializes in cranking good times out of the smallest stringed instruments and Willy exudes charm behind his guitar. Everything they do is a fusion of old and new. Cody is eager to bust out his fiddle for Gaelic interludes of sublime beauty, the rest of the band brings them into the heartland of America with crashing drums and electric guitar. Their hard, aggressive, outlaw sound juxtaposes perfectly with the beauty singing through the fiddle strings.

It’s not just the music that makes Old Settlers a next level experience. It’s the crafts, the yoga, and of course the food. Offering true Texan selections like fried peanut butter and jelly sandwiches (which I passed on) I think one dining experience deserves special praise. 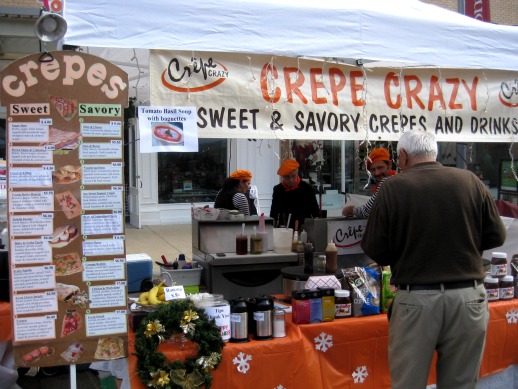 Owned by a couple in Dripping Springs, Crepe Crazy was the most popular dining attraction at Old Settlers. By the time I made it there at 8 PM it was sold out of damn near errythang. I had the ham and cheese crepe, which may sound simple, but was an elegant touch to top off my evening and fill up my stomach. It tasted better than the catered food in VIP. Everything was made fresh in front of you, with whatever finishing toppings you could crave, and the fillings were piping hot perfection. The reason I’m writing about it is the texture and flavor of the crepe itself – which was like sourdough stretched thin and spongier. It’s worth mentioning that almost all of the employees including the owners are deaf and they looked like they were enjoying the fuck out of Old Settlers.