Yesterday I awoke with the kind of excitement that only Christmas can bring to a child, yet it was something entirely different happening for me on this particular day. Today was officially CHANCE THE RAPPER DAY, or at least in my world, and with it landing on taco Tuesday as well, I was overwhelmed with happiness (and tacos). Chance had played the Fillmore in Denver back in September, and now he was back to headline one of the world’s biggest and best venues – Red Rocks Amphitheater. Tickets had sold out soon after their initial announcement, and the jam-packed lots were evidence of that.

Arriving to the lot as a seasoned RR attendee was a bit off-putting. Teenyboppers engaged in vodka chugging, dramatic arguments and other crusty activities filled the lots, and police roamed between rows of cars to serve up their intimidating presence. Regardless, anytime at Red Rocks is a time to be grateful, so we took in the overheard conversations as a highlight to the show itself.

“No Sarah, I’m not talking to her. I SAW the screenshots Becky!”
“My mom was all worried to drop me off like that Almost Famous movie, but I’m already high!”

We made it inside for a bit of DJ Oreo, who played a good chunk of radio hits to get the crowd stoked, and soon enough Chance the Rapper was gracing the stage before us. 10,000 mouths screamed at the top of their lungs and another 10,000 pairs of hands clapped as loud as they could stand. Taking in the incredible crowd before him, Chance started off his grand performance with ‘Blessings’, which followed into ‘Angels’, with the screen behind him turning into a colorfully silhouetted skyline. Chance wasted no time in giving each side of the massive stage at Red Rocks some love, and it makes you wonder how he keeps his energy levels up that long. 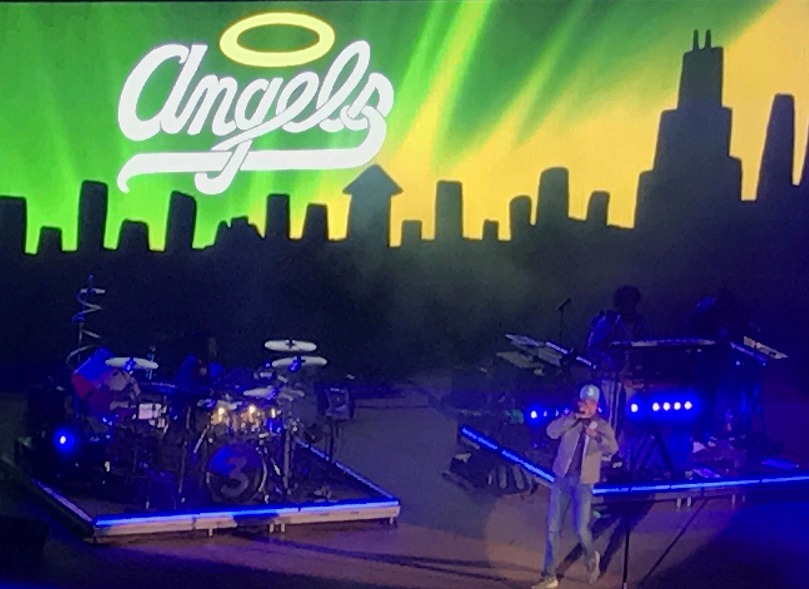 After a quick announcement that it was officially Acid Rap Week, he served up Acid Rap favorites like “Pushaman”, “Cocoa Butter Kisses” and “My Favorite Song”. During his last tour, Chance had an incredible stage design filled with puppets and characters from the Coloring Book album, and I was definitely expecting something equally as epic this time around. When flames shot up from the stage during ‘Smoke Again’, it delivered more than Fillmore could have ever dared. More favorites, like ‘Waves’ and ‘Ultralight Beam’ kept everyone singing lyrics in unison, and when Chance stopped to speak, we were still yelling out loud. He took the opportunity between songs to thank his production and music team, including Peter Cottontale in particular and his backing band, The Social Experiment as well.

What happened next was a complete highlight for everyone, and some almost felt like it was a sign from God himself. During ‘Sunday Candy’, the sky opened up with a shower as Chance sang ‘Rain down Zion, it’s gonna rain’. At that moment, it literally felt like a cloud of happiness had burst over Red Rocks and we were all music loving fools just singing in the rain. Almost as quickly as it came (conspiracy?), the rain was gone as Sunday Candy ended, and we gained our rowdy energy back as “All We Got” and “No Problem” were dropped next. The instrumental emphasis on these songs was a beautiful addition, and is a truly perfect match for an outdoor venue like Red Rocks.

As an artist who heavily relies on merchandise sales, it was heart-warming and almost overwhelming to see how many attendees were rocking merch gear. The team that stands behind the well oiled Chance machine work hard, and the obvious effort shines every step of the way. Some may say Chance has been overhyped, but he truly is an artist switching lanes in the industry for the first time in a long while. In addition to remaining an independent artist, everything he stands for is encompassed through his Be Encouraged mentality, and one live show will seal the deal for anyone.

With the night nearing its end, we got the final handful of signature tracks, including ‘All Night’, ‘Smoke Break’, ’Finish Line/Drown’, ‘Summertime Friends’, the last two being hugely sentimental tracks that had tears welling in more than a few eyes. Once again, Chance the Rapper delivered an awe inspiring and uplifting performance, and we couldn’t thank him enough. With another night ahead, we envy the attendees who have no idea what lies in store.