Descending on heartsick terrain in demoralizing and disconsolate times, here come the Dimond Saints, demonic duo comprised of Oakland producers an-ten-nae and Releece. From a faraway universe of secrets and shadows, the enigmatic masked avengers finally have unveiled ‘Prism in the Dark’, their long awaited full-length LP of original music. Eighteen maniacal and meticulous months in the making, the narrative is everything it promised it could be, profoundly hinting at going further, by forwarding the avant-garde in spiritualized, psychedelic bass music.

Like an irrational God on the blackest of Sundays, “Procession” announces the missive with ample ambient acreage and a bulbous drone. The ghostly introduction is almost discomforting, as notification of our imminent departure. In an early, fleeting glimpse into how confidently this record sidesteps convention, a fractured wail appears; the cry seemingly unearthed from an Edwardian closet, buried in a crypt for a hundred years. Yaarrohs, the vocal power behind several stunning Prism tracks, immediately sets the tortured tone on “Innocence,” imploring over sparse, orchestral drama. Hers is a voice that cannot be mimicked, it alternately soars and moans, every bit as shivers-down-the-spine inducing as its thrilling, fervid landscape.

On “Sing,” elastic synths and bass gymnastics ignite a sinister romp through subsonic netherworlds, as digitized vocals prance a behemoth bottom end. “Hirohito” is among the fundamental components that define Prism; carefully curated live instrumentation and a torrid raiding of Bangkok bass tombs coalesce, for this is a debauched vagabondage in tribalized gangster shit. It’s 3am somewhere in Sukhumvit, and you’re lamping in the Imperial lounge, drinking blood with Yakuza O.G.’s, whilst working girls adorned with serpents steadily feed you the finest grapes. Welcome to the Dimond District, behold this future moon music. 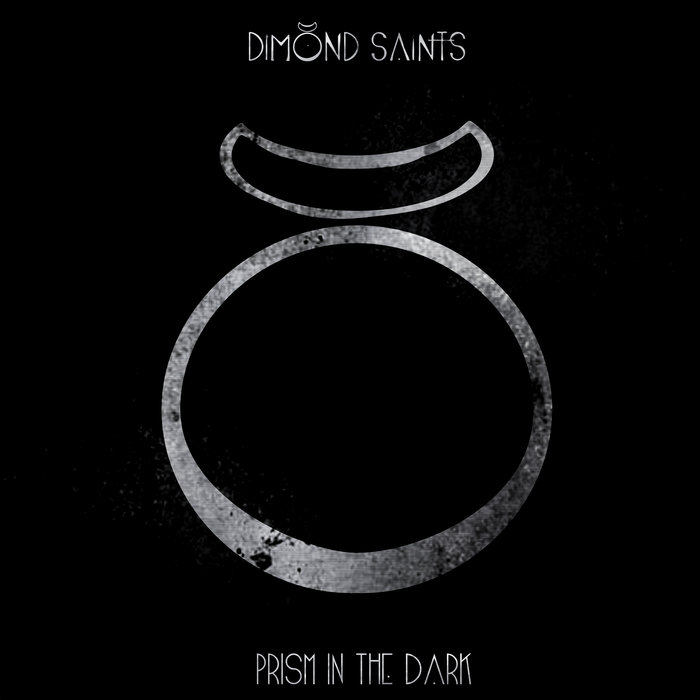 A minimalist DIY mindset informs the entire Prism expedition, an indie-rock ethos and artistic intention best exemplified by the “less is more” approach towards drums and space. One could call this an anomaly in (much of) contemporary dance music, though a remarkable discipline that serves the duo exponentially. “Find a Way” finds Yaarrohs once again at the helm, her rue and rumination harkening back to the rain-streaked melancholia of a mid-90s UK trip hop temptress. Dimond Saints update the emo, installing colossal 808 kick to the hearth, a tandem dalliance with (live) tuba and trombone. The throbbing foundation martials Yaarrohs’ conviction to a desirous, defiant benediction; -“The battle’s lost but the war goes on/You’re jumping ship but I’m stayin’ on/Hold on tight…”- the vulnerable moment hangs in the air, stark and devoid of pretense.

Creepin’ on a come up like thieves in the night, “Way Down” is the album’s thunderous apex. With elements facing the Far East, a haunting hymnal to summon the moon’s gaze, as we enter the heart of darkness. Within this occultish dirge, mined from a cathedral graveyard buried beneath a crescent city, globular brass-bass empowers the steady march, and staccato blips dance delicately atop the hypnosis. The Saints deftly hold space for exploring esoterica; a chorus raining diamoku invokes the leviathan within. “Way Down” is an unearthly revelation that defies categorization, and might be Dimond Saints’ masterpiece. 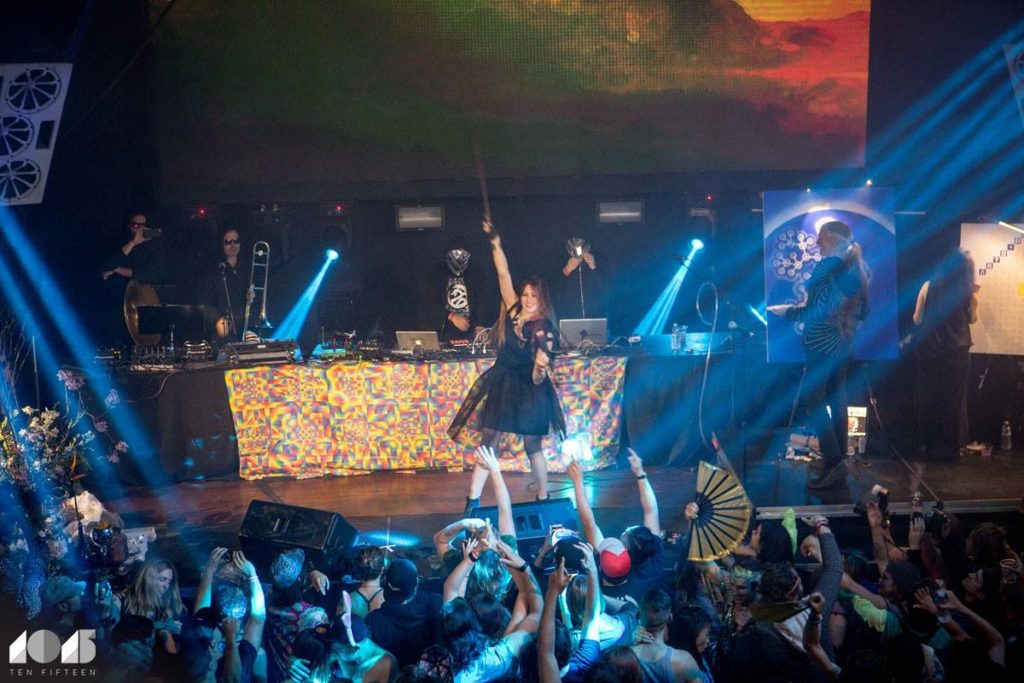 On the outskirts of this kaleidoscope, “Ginzu” is Dr. Dre meets Bobby Digital, the Saints hosting the RZA’s Shaolin semi-formal in a Compton opium den. Vocalist Eitch appears for the second time on the title track, a ghostly examination of self-actualization. “Prism in the Dark” also welcomes HÄANA back to the Dimond diaspora (last year the trio uncorked a cabalistic redux of her “Bryn Al Mawr“), as gossamer violin embellishes the celestial Eitch. Ms. Thiem follows with a proper feature on “Aoide“, a mysterious, mechanical jam. The Nordic empress provides stygian strings, moaning in matrimony with precision live-percussion and percolating production. Dimond Saints’ opaque collaborations with this scintillating firebrand are guaranteed high art, steadily pushing the boundaries of banghra-goth in 2017.

Deep in the Prism pilgrimage, Yaarrohs returns for a pair of gut-wrenching numbers, including first single “IDGAF“, released last summer. At once provocative middle finger and tantalizing come-on, the veiled vixen shames a scorned lover, while salacious synths and diminutive 808s crystalize the voyeurism. Yaarrohs swoons ancient on album closer “Stay“, an-ten-nae and Releece making for her a bed strewn with black petals, warm Hammond organs and reverberating handclaps. A lover’s lament, a sorrowful serenade, the sorceress pleads her passion with panache. Innervating swells of strings and synth, subtle drummer-boy snares, and the subservient bass foundation slam the trap door shut with authority. 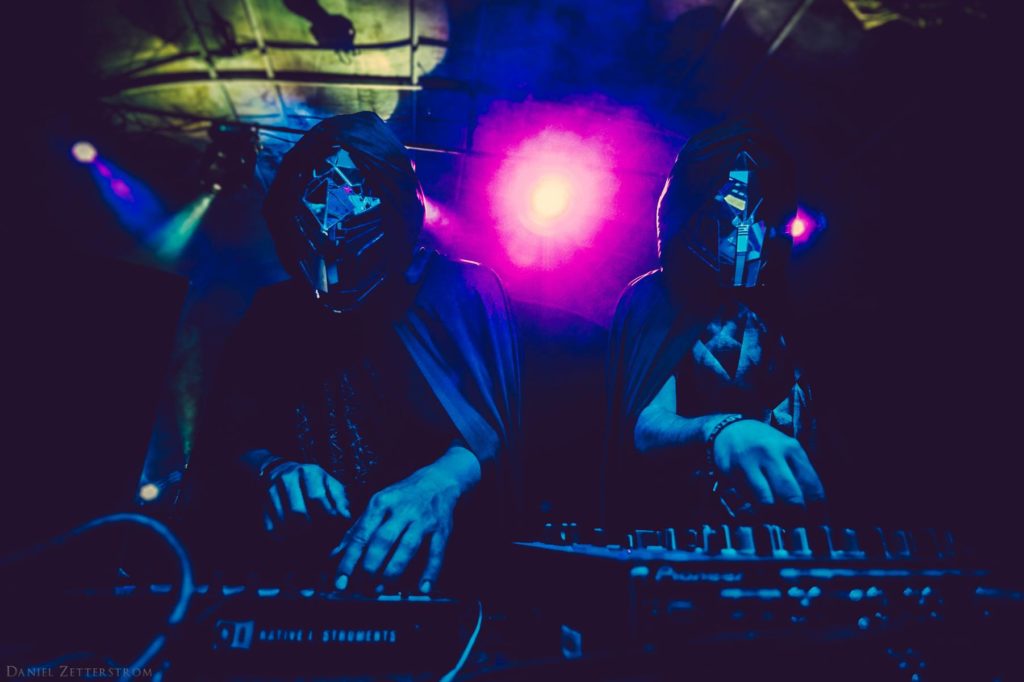 In the end, we make it through, as ‘Prism in the Dark‘ keeps its promise to create a container; a diamond the duo embalmed with equal parts blood and sweat, and a river of tears runs through it. In bravely building this pantheon au courant, Dimond Saints touch the proverbial sky in stepping out of the bass-culture comfort zone; giving love to the world, while taking us tumbling way down whatever unholy chasm their music is capable of opening.

PURCHASE ‘PRISM IN THE DARK’ HERE