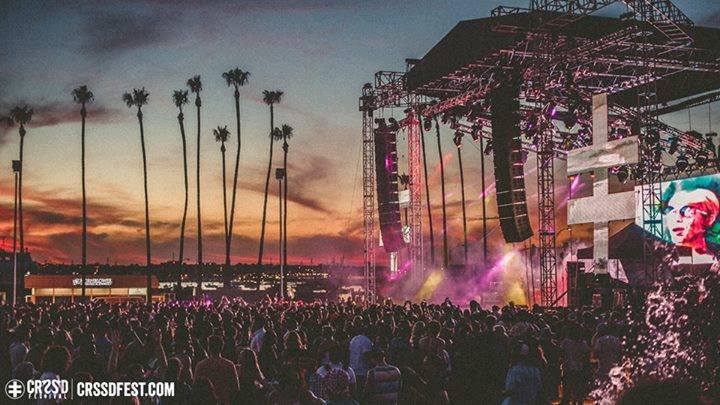 California has been the hub for many musical explosions; the counter-culture rock movement in the 60’s that began out of the Bay Area is one example. Move forward a couple decades and you’ll find a new attitude blossoming with the rise of gangster rap and hip-hop that stemmed from the LA and surrounding areas. Recently, west coast electronic music has gained serious momentum as dub and glitch are now sweeping across the nation. Today, a new genre has claimed its spot along the Pacific. With the widely respected Dirtybird and Night Bass brands drawing on the new age of electronic, it’s clear California is the new front runner in modern House music.
During the first weekend in March 4-5th, San Diego’s Waterfront Park welcomes CRSSD Fest back to its’ ocean side location for the biannual dance music celebration. A gathering that brings together some of the top names in dance music alongside some of the freshest national and international up and comers. This year’s Spring edition includes Australian producer Flume, British DJ Duke Dumont, Canadian electronica duo Bob Moses, both Dirtybird label founders Claude Von Stroke and Justin Martin as well as Anjunadeep alum Lane 8 and Yotto.
The two day festival will feature several musical acts to be spread across three stages. The Ocean View stage will lay host for the main headliners and live bands including elextro-sex duo AlunaGeorge, the hip-hop laden dream pop sounds of Giraffage and British-American singer/songwriter and multi-instrumentalist Blood Orange.

What’s California without The Palms? This stage is situated in a palm tree patch near the festival’s Southern end. Expect an array of warm House beats and techno thumps provided by Scottish-based Jackmaster, the widely influential producer Skream and the obscurely named English electronica collective Horse Meat Disco, to name a few.
Centrally located just in front of the historic San Diego County landmark building is The City Steps stage. Typically, this stage is saved for pounding out extended sets with some of the more underground acts in electronic music. This year features a special Seth Troxler B2B Eats Everything set as well as appearances by Damian Lazarus, Tensnake and Josh Wink.
While shuffling from stage to stage soaking in the California breeze across Waterfront Park’s lush, grassy fields and alongside jaw-dropping sunsets, be sure to stop and get in the interactive splash fountain. This open fountain is where patrons dance and frolic without being yelled at or fined by security – it’s actually encouraged! The event is 21+ so patrons will not be confined to beer gardens and CRSSD has even offered attendees a full craft beer and mixology program in past years.
Some additional artists joining the festival recently announced on the Phase 2 lineup include Cassy, Mija and Moon Boots adding to already stacked lineup. With additional artists announcements and after parties to be announced soon, don’t wait. Kick off your festival season this year with an amazing experience in Southern California at CRSSD Festival. Tickets are on sale now!