Denver, Colorado’s Analog Son have quietly been adding on to their funky enterprise over the last year, and we’ll all get a taste of their new album this coming January! The enigmatic duo consisting of bassist Joshua Fairman and guitarist Jordan Linit have penned January 24th as the album release date, and everyone is invited to boogie on the 27th at The Bluebird. It’s been some time since we were able to catch up with the guys behind Analog Son, and it’s easy to see why; 2016 may have been the band’s most explosive year yet. Analog Son has only one goal in mind when it comes to their music, and it’s to make people GROOVE. Tickets for the band’s album release party can be purchased through the Bluebird’s website here.

In the studio, Joshua Fairman supplies the bluesy infused bass lines while Jordan Linit gives us eccentric licks from his guitar, but to see Analog Son’s live show is a unique experience as well. Thriving with collaborators from all across the board, each show is usually accompanied with live sit-ins throughout. Analog Son’s layering of improvisation and vintage production create a beautifully solid musical harmony and it’s what puts them into a league of their own. With ‘Stomp and Shout’ we were able to take a journey into the creative depths of Analog Son’s style, and that’s all it took to get us hooked. Now with ‘Black Diamond’, the duo continue to deliver their unique fusion of modern production and rugged vintage sound.

With the official album release inching closer ever so slowly, it’s time to prep ourselves for the oncoming of FUNK. After giving their new Ivan Neville laced track ‘Sunshine’, a listen, it’s absolutely safe to say that the rest of Black Diamond is teeming with greatness. Read on as we speak on the bands’ recent happenings, studio sessions, and more.

CYM: ‘Black Diamond’ saw Analog Son collaborating with a number of different musicians during your recording session in Jazz Fest last year. Who are some of the artists you’ve been working with on the new album?

CYM: Josh, you’ve just spent a few weeks on the road filling in and touring with fellow Colorado band Sunsquabi. How was that experience?

Playing with the boys in SunSquabi has been awesome. I worked on the last to records they put out, so we have great musical connection. In fact, we recorded the third show we ever played together, a sold out show in Tahoe, and it sounded awesome. So we got on the same page really naturally. Looking forward to more shows with them for sure. It is super fun to take some of the old school funky style I’ve developed and combine it with their brand of future hydro funk. Their fans have been incredibly welcoming and I’m stoked to be part of the Squab squad.

CYM: Jordan, you mentioned that having Neville sing one of your own songs was a great experience. Tell us more about how it went down in the studio!

Truly a memorable day! I had written a song called, Sunshine, 4 or 5 months before we recorded the track. I wrote it at my home studio. The song writing process happened very natural and within a couple hours I had the Lyrics, Melody, and Guitars parts laid down. I knew I wanted to have a guest vocalist, but couldn’t decide on the flavor till months later. Joe Michaels (a friend and fellow music producer) called and said Ivan was going to be in town the following day. It was a natural fit to get Ivan into the studio again and get on a couple more Analog Son Tracks. The evening before the session I was deciding what song to record the following day. I was sifting through old demo’s when i came across, “Sunshine”. I knew that was the song.

Usually our studio sessions begin with Drums, Bass, Guitar, and Keys, but on this day Josh Fairman (Bass) and George Horn (Drums) were out of town playing shows. So, we recorded Sunshine in reverse order. Started with my guitars, then Ivan’s vocals and keyboards….then a couple months later (the session got lost on a hard drive!!!) we went back and records drums, bass, horns, and background vocals.

I was nervous (again) to play my scratch vocals for Ivan, but nevertheless it had to be done. I played him the tune and he said it was cool and that I should just sing it. While I appreciated his encouragement I knew his voice would bring the song to life. He proceeded to belt out a few takes till we had the keeper. Watching a legend perform your tune is the studio, is a moment I will never forget.

CYM: You guys are kicking off your tour in January, then will be wrapping things up here in Denver for the album release party on the 27th. What are some of the feelings and goals as tour creeps up?

The band is in a prolific writing period. Excited to release this new music, and we are already working on the next album with Eddie Roberts producing. So the ideas are really flowing and everyone is coming up with really cool input into the new music. We are really focused on creating the live versions of the Black Diamond album to the fans. We will be playing a ton of new music on this tour, and we are excited to share this musical journey through Nola to the Mountains of Colorado with the people. 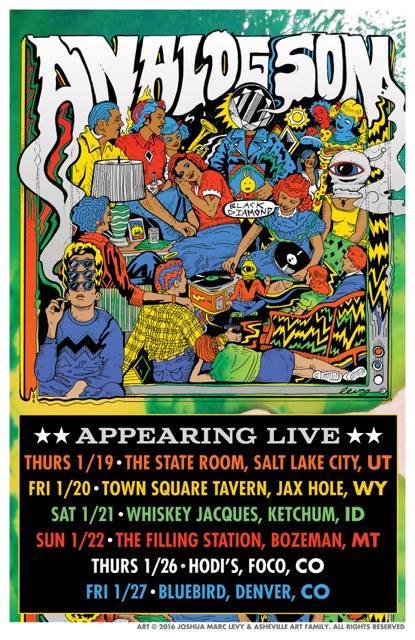