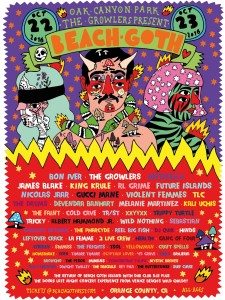 October 22nd marks the beginning of the fifth installment of The Growlers festival, “Beach Goth”. This year The Growlers (or whoever does the actual planning for the two day SoCal event) put together an unprecedented lineup geared toward bonafide music snobs, like me. That being said, there really is nothing goth or extra beachy about the festival this year. Frankly, I’m just impressed with the amount of absolute LEGENDS on this year’s lineup. It’s like OldChella but WAY cooler because we’re gonna rock out with our cocks out; not sit around in assigned seating.

The angel voiced wild man Justin Vernon will be in attendance this year. For Emma has been caressing my ears and emotions since my sister’s best friend showed me the album my freshman year of high school – thanks KC. Haven’t witnessed him live but I cannot wait to shed a tear to this soulful motherfucker. His highly anticipated new album is set to release September 30th so you can bet your bottom dollar he will be playing his new songs on stage.

Nicolas Jaar is the ultimate master at fucking the crowd. Yes, that means you too. Nico carefully caresses you, he gives you sweet foreplay – not too long but not too short either – and then when you are dripping and shaking, he gives you the ultimate orgasm full of equal parts passion, love, and hate. You’ll squirt in unison with the entire crowd.

Our gracious hosts are not to be missed. I’ve only heard amazing things about ultimate weirdo Brooks Nielsen on vocals. Their new album release date is September 30th as well, cannot wait to hear what’s in store for this one. It would be plain rude to miss these beautiful men do their thing and definitely don’t be caught standing around for these guys’ set, you’ll look like a total weirdo on the D Floor.

King Krule is the real life story of that Judd Apatow movie, “Walk Hard: The Dewey Cox Story.” This kid looks like an unlikely hardened singer of the blues, but that’s exactly what he is. He’s got a voice that could make sailors weep and he’s going to be tearing up the stage at Beach Goth 2016.

Egyptian Lover is a legend in the dance/hip-hop arenas. He’s one of the pioneers of the 808/909 drum machine culture. He hasn’t really stopped since the 80’s but has remained low key in the new electro resurgence of the late 2000’s. Don’t miss this legend.

The Pharcyde has been my favorite stoner group since my highschool days and I got to see them for the first time at Further Future last spring. They bring unparalleled energy, good humor, and their classic 90’s feel to the stage.

Your favorite 80’s/90’s/00’s raunchy hit machine, The Violent Femmes, will be rocking out – most likely (hopefully) with their cocks out.

Beach Goth 2016 is set to be one of the best festivals of the year. It’s beautifully low key and put together with love by an honest group of musicians that just want to remind you how good music is supposed to make you feel.