Since October 2014 I have been following Ferguson solidarity protests in Oregon.  I’ve witnessed first hand the painful and glorious journey of the activism that #BlackLivesMatter protesters are dealing with in this movement.  In January I interviewed Teressa Raiford, lead organizer with Oregon’s most politically active organization, Don’t Shoot Portland.  Teressa gave a brief story about her life and beginnings of activism, and since the article the group has made monumental and historical changes. As the year comes to a close I would like to share with you the top achievements of this inspiring woman as told by #DontShootPDX activists and leaders.

The reason that Don’t Shoot Portland and the Black Lives Matter movement is relative to Compose Yourself Magazine is because it not only addresses the underlying issues of our communities, but because it’s about strong black women leaders like our lead editor; Tai Carpenter. Teressa Raiford is actually Tai’s mother, and held a big part in the start of CYM before she began her sole work in community activism. In fact, CYM’s first handful of music conferences took place in Austin, Texas’ SXSW, with Teressa’s advertising agency Intrinsic Entertainment Group. Both Teressa and Tai’s current success has been a part of a sweeping movement nationally for empowering black women. 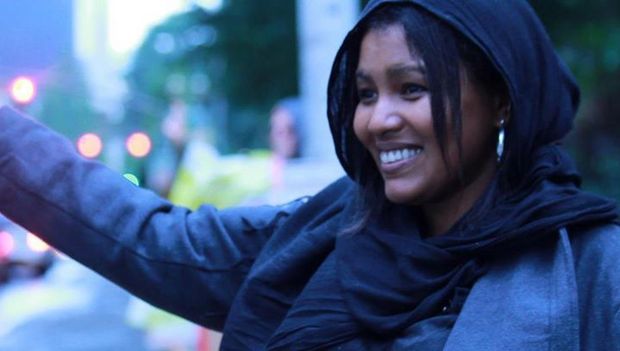 Not only was Bernie Sanders in Portland on the anniversary of Mike Brown’s death, but Teressa and 56 other protesters were arrested nationwide that week. Check out this video of Teressa after her arraignment on August 11th following her arrest.

During the rally for Mike Brown protesters blocked off the intersection of SE Division and SE 82nd Avenue for 4.5 minutes of silence in honor of Michael Brown. While marching back to their event at Asian Pacific American Network of Oregon (APANO), Teressa was approached by two Portland police officers with directives from the FBI to arrest her. On her own accounts, Teressa was left in the back of the cop car with no A/C (100 degree August day) in the sunlight for nearly an hour while Portland police conducted cruel and unusual acts of punishment upon her.

She was also fully cavity searched while inside the jail, but Diane Chavez, who was arrested for filming that day, claims that her pockets hadn’t even been searched inside the jail. While inside, Teressa was listed as a Jane Doe (although the police were calling her by name, as seen in this video) and she was placed in solitary confinement for the duration of her time inside Multnomah County Jail. During the protest organizers complained about the lack of leadership from local organizations and to this date the only response I have found from the president of the local NAACP: 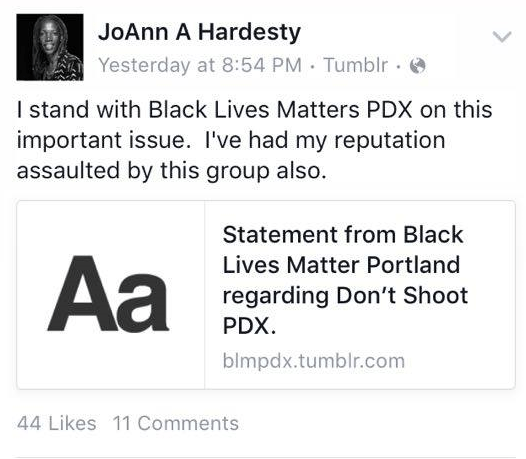 I personally can’t understand why the local NAACP would not support Teressa to fight this wrongful arrest, unless there was corruption involved. It seems Hardesty chooses to support slander and empty claims instead. But she doesn’t seem to be that creditable to me anyway – one look at her past relationship with the organization that she now leads says more than enough. To me, it sounds a lot like sophisticated racism.

“For the past two years, the local NAACP has suffered internal dissent and shrunk from being a forceful presence in Portland. The former President and administration were accused by community members of ignoring pleas for assistance in civil rights violations and, moreover, of using the hefty reputation of the NAACP to promote their own business pursuits. In February, a representative from the NAACP’s national offices chaired a local meeting and cleaned house. Former President Roy Jay and Vice-President JoAnn Bowman [Hardesty] resigned.”

When Bernie Sanders came to Portland, Oregon and garnered a whopping 28,000 person crowd to The Moda Center, he met with members of Don’t Shoot Portland including Glenn Waco and Marcus Cooper that night after the rally to discuss his stance and what he can do for the #BlackLivesMatter movement. Teressa was unable to attend as she had been illegally arrested earlier that day by the Portland Police Department on the anniversary of Mike Brown’s death and the start of the Ferguson protests. That night after the meeting between the Bernie Sanders campaign and Don’t Shoot Portland, Senator Sanders tweeted his shout out to Teressa.

This was the first public town hall that the Senator had to ever cancel in his career. Protesters marched up 82nd Avenue from Powell Boulevard to Portland Community College –  Southeast Campus chanting ‘Hands up, don’t shoot’ and ‘I can’t breathe’ at about 2:30 PM to spread the message of police brutality to the Senator. After 45 minutes of disruption, Wyden decided to cancel the remainder of the town hall and Don’t Shoot Portland held their own town hall to talk about the issues of police brutality led by Lauretta Austin and Raissa Lyles.

Dawson Park, where it all began. Don’t Shoot Portland started meeting and rallying in the park shortly after Treyvon Martin was murdered in 2012, and this summer while on tour Janelle Monae contacted Don’t Shoot Portland to organize a rally and free concert for the community. Teressa picked Dawson Park as the venue because not only did it hold plenty of space along with gazebos for events, but it is located in the black community in North Portland where Teressa grew up. To have one of 2015’s biggest pop stars protest police brutality with us was truly an honor.

Don’t Shoot Portland leads the march on May Day.

On May 1st, 2015 multiple groups of protesters met up and gathered in Portland’s famous Pioneer Square. The march took many different twists and turns through the streets of Downtown Portland with the echoes of hundreds of people chanting “Black Lives Matter”, “Hands Up, Don’t Shoot”, “I Can’t Breathe” and other modern day human rights chants blocking off the Burnside Bridge and other area attractions. At about 6:45 PM protesters clashed with the Portland Police and riot cops after we were bombarded by flash bangs. Protesters had surrounded a unmarked white van that was filled with police officers. Riot cops responded by using violent force to move protesters and get the van out. Personally I saw no protesters acting out in violence or showing signs of aggressive retaliation. In the midst of the chaos myself, Teressa Raiford, and Jesse Sponberg were maced by riot cops who were driving away after someone about 50 feet to our left threw a water bottle at one of them. All while a small child is only a few feet to our right being shielded by his father. The Portland Police Bureau acted out of line that day as many witnesses saw police on bikes assaulting protesters. Much of this day was caught on film and can be found here on Ustream. 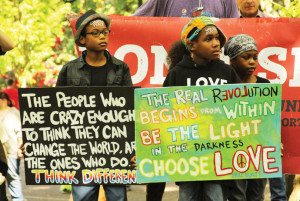 February 28th, 2015 Teressa and Don’t Shoot Portland served Portland Mayor Charlie Hales a federal lawsuit for the illegal ketteling of protesters by the Portland Police on the night of November 29th, 2014.

Over 30 years of Portland hip hop came together at the Ash Street Saloon on October 11 to perform some dope local hip-hop and spread the message of stopping local violence sponsored by Don’t Shoot Portland and Laurie Palmer’s organization: Go Get Your Child, a nonprofit to prevent local gang violence. Prior to the show at Ash Street Saloon, a rally started at Pioneer Square and from there protesters took to the streets to march in solidarity to the venue. Somewhere around 50 local artists performed that night from Glenn Waco to Mack & Dub and the Smoking Section. The event was so successful 2nd part was added on November 5th after a Stop Mass Incarceration rally was held at the Portland Justice Center along with the Million Masked March by Anonymous, the group marched in the streets to the Ash Street Saloon once again before the show.

This video is POWERFUL! Just after Don’t Shoot Portland received the news that we had been investigated by the Federal Department of Criminal Justice, Teressa chants Black Lives Matter in the Oregon State Capitol. What the investigation basically meant was that it was criminal for us in Oregon to say “Black Lives Matter”, meaning that Teressa cannot say that her own life matters, or that her mother’s life matters, or that her children’s life’s matter. So what was Teressa’s response? Bring her posse to the Oregon State Capitol and have everyone scream the very phrase that the DOJ doesn’t think we should be saying. The symbolism behind this video speaks for itself. Watch the video from the beginning until at least 6:45, things start to escalate around 3:50 as Teressa enters the dome in the capitol.

On one of the biggest days of the year for corporate retail Don’t Shoot Portland marched and disturbed business as usual at the Lloyd Center and throughout Northeast Portland. Other cities that marched in solidarity on this day included Seattle, New York City, and San Diego and as a result TIME Magazine estimated a $1 Billion decline in Black Friday sales from 2014. Go team!!!

I myself have taken action on this specific issue, teaching people what their rights are as stated in our American Bill of Rights. We have done multiple Know Your Rights workshops throughout the city at places like The Regence Boys & Girls Club in Colombia Village and the YWCA teaching adults and children about freedom of speech, and how to properly and safely interact with police.