Teressa Raiford is the lead organizer of Don’t Shoot Portland, a civil rights activism group based in Portland, Oregon. Raiford is also the mother of two and a native Portlander. She owned an entertainment advertising group in Dallas, Texas called Intrinsic Entertainment Group LLC and is the Chief Information Officer at the World Arts Foundation, as well as the state director of Oregon for UniteWomen.org. In addition to holding these massive titles, Miss Raiford is also one of our own contributors for Compose Yourself Mag.

Born Teressa Lynn Raiford on September 23, 1970 in Portland, Oregon, Teressa was the oldest out of 11 children and a ward of the state growing up in foster care, Raiford was left to become the “mother figure” and caretaker of her siblings where she began her role as a leader. Teressa always strived to be the best role model she could for her siblings and those around her. Miss Raiford grew up in Northeast Portland, eventually attending Jefferson High School and graduating in 1988. At age 18 in 1988 she had her first child, her son Terrace. Soon after in 1991, she had a daughter, Tai. A single mother raising two children in Northeast Portland, she was forced to continue to live in poverty. In 1997 seeking better for herself and her family, Raiford uprooted from everything she knew in Portland to move to Dallas, Texas. In Dallas she worked as a loan officer for Bank of America, then went onto handling merges and acquisitions at TXU Energy before starting her own business management company; Intrinsic Entertainment Group LLC. (More background information about her time with Intrinsic can be found here.) 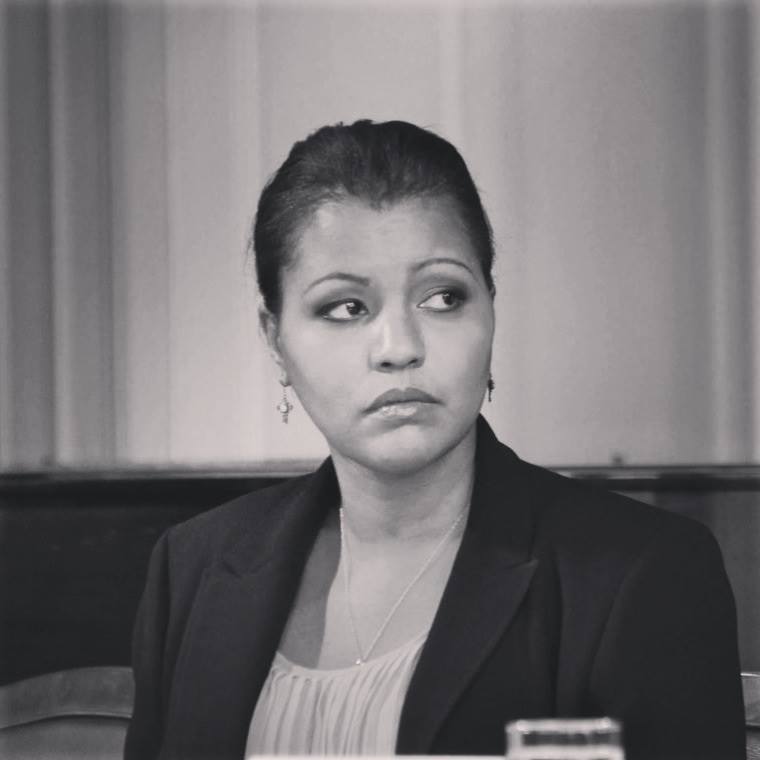 In August 2010, she came home to Portland for a short visit, but in September her nephew Andre Payton was shot and killed in a gang shootout. Following this tragedy, Raiford began her community activism trying to find out what she could do to put a stop to poverty and violence in her community. In September 2013 Miss Raiford began running for City Commissioner seat one of Portland, Oregon. After running for office, Raiford forged ahead with her advocacy in Portland. In August 2014 she started the organization, ‘Don’t Shoot Portland’.

What is your opinion about the two cops who were shot and killed in Brooklyn, New York on 12-20-2014?

I never like to hear about anybody being murdered, I feel the same way about murder as I always have. I don’t agree with it.

What is your motivation for working on this movement?

#DontShootPDX gives concerned citizens an opportunity to empower community members via direct engagement and educational workshops.  Its necessary to have access to people who have an equity lens as it relates to protocol, systems operations, and can also assist in the training and process to document discrimination and inefficiencies.  Our outreach is designed to host and moderate necessary discussion regarding politics and community safety via direct dialogue with policy makers and elected officials.  #DontShootPDX is a Community Action Plan that develops useful strategies for community engagement. Our goal is education focused on community sustainability and safer neighborhoods for all.  We are focused toward root causes because we know poverty breeds crime. 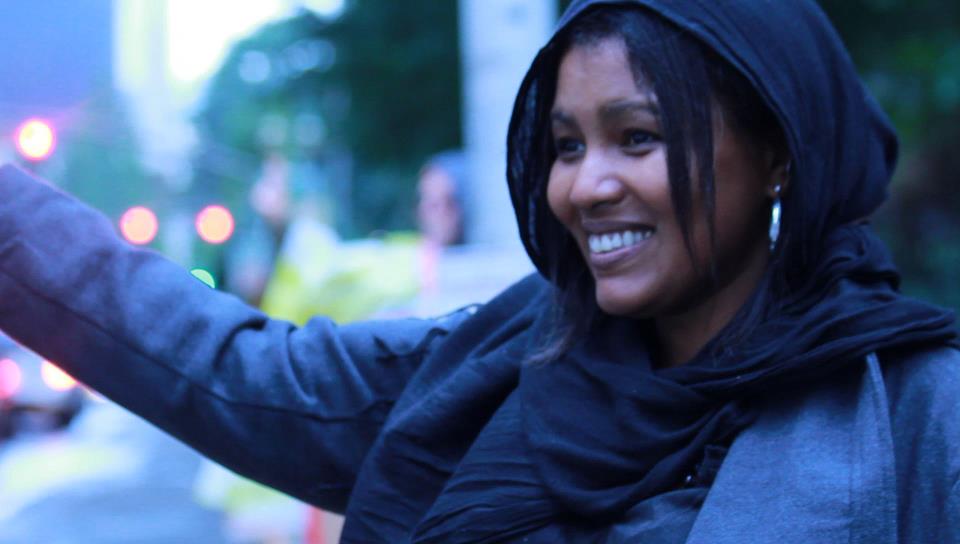 What are your long term goals for the movement in Portland?

Economic and Civic Power for people living at or below the poverty line.  The poor are usually a target for police assaults and community violence.  In Portland people of color who are poor are over represented in the criminal justice system.  DSP is developing educational outreach and looks forward to securing more education and civil outreach.  As a Community Action Plan we are working together so that our states goals towards equity and inclusion are in line with a war on poverty, and not people.

What kind of events and protests should we expect to see from you in the future?

Right before Christmas we protested the Portland Police Association and had a lengthy meeting with Union President Daryl Turner who had previously made statements to the press that seemed to blame protesters for the death of two NYPD Officers. We have planned workshops, meetings and protests happening well into the New Year! Saturday, January 3rd our group will be protesting at a Town hall hosted by Senator Ron Wyden, We are planning to protest the “Prison to Pipeline” issue within Portland Public Schools and will demand an audit and investigation for complainants. Actions for community outreach are also planned for other local government entities though people will have to stay tuned for the updates.  Check us out at www.dontshootpdx.com

What other projects are you currently working on?

Building allies in the legislature and following up for a meeting with Governor John Kitzhaber.  We have our first community dialogue on Saturday, January 10th with Mayor Hales, and PPA President Daryl Turner. We are also building outreach to establish a network of grassroots organizations and partners that would like to support a Community based Action Plan.

How do you believe your background allows you an advantage in this movement?

Running for office gave me an essential insight of the character and processes of Oregon’s political system.  Working with different lobbying organizations, I have seen first hand how relationships are formed and utilized.  Establishing access from a political platform to support community engagement has been the most humbling experience.  In the process I have developed several key relationships and have been able to maintain the status of someone looking for accountability.  Elected officials in our districts know who I am.  That definitely helps our movement because we don’t need them to validate us… The community is coming ready and able to build.

Being a Woman in still very hard when you are in a position where decisions have to be made or culture shifting.  It’s something I try not to take too hard but this is a double negative issue considering the subject matter.  I am the mother of a 25 year old son and I am using my fear for his safety to focus on being proactive in the fight for law changes.  No parent should have to bury their child.  In our state we are not exempt from police shootings and in custody deaths.  Working on this issue is very intimate for me and other women, which has definitely been reflected in the global leadership. 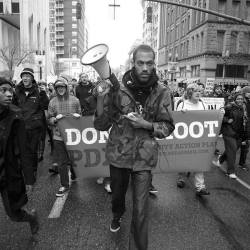 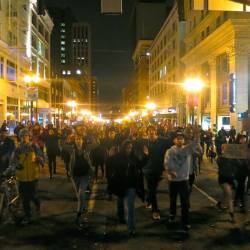 What personal factors are involved in this movement for you?
Poverty, Police brutality, Racism, and In Custody Deaths. Adrienne Cabouet also wanted me to include the case of Keaton Otis in Portland. Keaton was shot 23 times in a traffic stop in Northeast Portland simply because he “looked like a gangster”, although he had his hands up when he was killed. You can read the detailed review of the events here.

What is your mission statement for Don’t Shoot Portland?
“We are Don’t Shoot Portland: citizen advocates united in protest against systemic racism, police brutality, and state violence. We stand in solidarity with the #Ferguson and #BlackLivesMatter movements. We demand justice.”

When and why did you start the organization, Don’t Shoot Portland? Who else/what other organizations were involved?

The development of the Don’t Shoot Portland gathering was in direct response to the murder of Michael Brown.  Being an advocate locally and having several activist friendships it was a call of action from a close comrade.  Once he made the call we were on the ground running. Myself not being too interested in marching and protesting thought I could play the role of community education manager.  My plan was to mobilize the people to make change using the system.  It seemed that if we were thoroughly and actively engaged in civics that we could make the changes necessary here locally and use the effort to help other communities on a state wide level.  We are lucky enough to live in a very liberal city and we hope that a combined effort can be a benefit to all Oregonians.

What organizations and groups are you currently connecting people to? Whose supporting your efforts?

In your opinion, what is the best outcome that you wish to see from this movement in Portland? Nationally? Globally?

Equality.  Equal Laws as it pertains to assault and murder.  Laws that ALL people abide by for the common goal of public safety.

How do you feel about the ideals and goals of the group Come and Take it Texas and the Dallas Black Panthers? Groups of open carry advocates who want the right to defend themselves and loved ones as they see fit.

I wish we had representation like that with the time to help educate the community members on the relationship building aspects of that type of community presence.  I lived in Dallas and there is a cultural difference.

As a community, what can we do to help?

Show up in numbers and help us expand our network and its capacity to serve the community.  Education and access to credible service providers is a essential part of this grassroots roots effort.

If I physically cannot get out to protest, how do you suggest that I support?

If you would like to learn more or get involved with Don’t Shoot Portland please check out their Facebook pages Dont Shoot Portland or Dawson Park. Also you may join their event pages for more updates on events happening in the Portland area. If you do not live in Portland, Oregon but want to find a organization in solidarity with Don’t Shoot PDX then please check out groups such as Don’t Shoot Dallas, Black Lives Matter (in many cities), Hands Up Don’t Shoot in Saint Louis (or simply Hands Up in some cities), and many other organizations across the nation.