This last Friday night at the Fillmore in Denver, CO was quite the party as many had expected. When Shpongle comes to your city, it’s a sure thing that you’ll find some of the best kinds of weird in your vicinity. With great supporting acts all night, there was never a dull moment. First, Alex and Allyson Grey cracked open the night with a brief speech. The crowd stood in silence listening to their calming voices talk about visionary art and spirituality. Alex Grey has been at the forefront of this movement to raise awareness towards the importance of visionary art within the culture. He has become somewhat of a modern cross between Terrence McKenna/Timothy Leary as the psychedelic movement progresses into a more grounded state. Drawing parallels between ancient traditions and science, he attempts to bring the dark to light and never fails to have a crowd of eager listeners when showing up to speak. 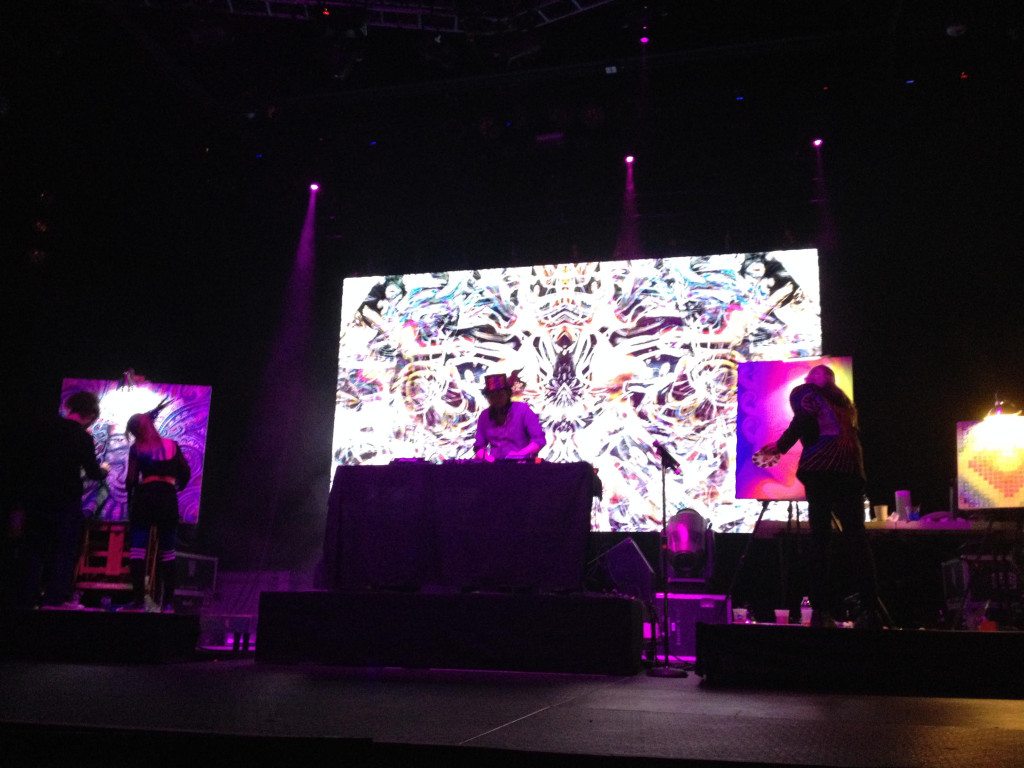 Photo by Paul Eckstein for Compose Yourself Mag

Next, local producer Templo broke the silence. Many locals were excited to see his name added to the bill on short notice, making him a perfect opener. He has played a large amount of shows recently and only seems to be gaining momentum with his chill progressive beats. Govinda hit the stage next accompanied by his wife, dancing. As always, he was full of energy and upped the energy level in the room as well. By this time, the venue was starting to fill up and the dance floor was moving. Random Rab, a Colorado favorite, slowed things down next. I’m not sure what genre you could try to put him under, possibly ‘Downtempo Alternative Hippie House’ chocked full of emotion. Whatever it was, it was beautiful.

Lastly, the act everyone had been waiting for was here. Accompanied by Alex and Allyson Grey, Morgan Mandala and Randal Roberts live painting, Shpongle hit the stage. Sliding around between worldy to other worldy sounds all night, the crowd was appeased. Everyone I spoke to said it was the best set they had seen from Simon Posford to date.

As I walked past the line of artists in their zone surrounded by so many unique individuals feeling the music, I was reminded of Shpongle shows in the past and why it’s always in your best interests to show up when you get the chance to be in these kinds of environments. ‘Are You Shpongled?’ from 1998 was one of the first albums I’d heard that opened me up to the psychedelic movement that Shpongle remains such a huge part of today. The huge crowds drawn over almost two decades are due to the influences they have made in the past and the continued relevance to it all shown today.