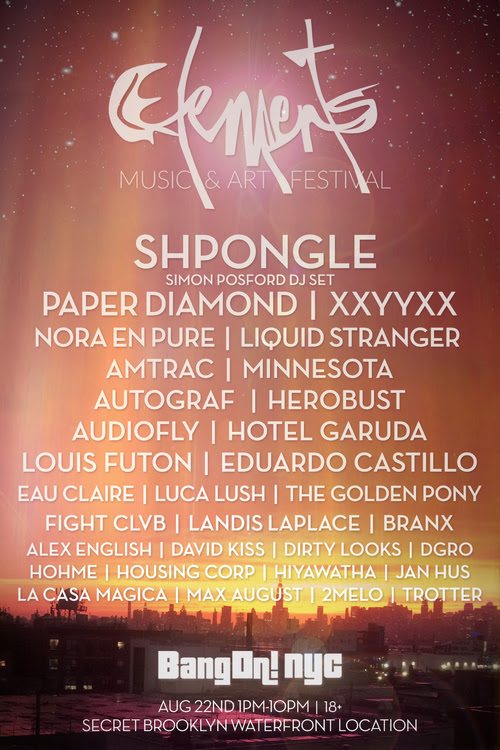 Returning to Brooklyn next Saturday, August 22 is the Elements Music & Arts Festival! Hosted by Bang On NYC! Bang On is New York’s premier underground party and event host. Usually a host of events thrown in Brooklyn warehouses, Bang On is moving outdoors for what’s looking to be one of the hottest parties of the summer, and I’m not just talking about the weather. With a lineup featuring artists by the likes of Sphongle, Liquid Stranger, XXYYXX, Autograf, Paper Diamond, Herobust, Branx, Minnesota, and many many more, we can already conclude that this festival is going to get wild. The vast lineup guarantees to bring a plethora of genres to the stage, bound to supply a wide variety of banging tunes all day and night long. Located on a ‘secret’ Brooklyn waterfront location (691 Columbia Street, Brooklyn, NY) the 18+ festival will go on from 1-10pm. If you went to last year’s Elements Festival, then you know what’s coming for you, but expect even bigger and better with the same good Bang On family vibes!

The artists will play on 4 different stages titled appropriately to fit the elemental theme; Earth, Wind, Water, and Fire.

Autograf, formerly Midnight Conspiracy, are a group of Chicago natives who incorporate live instruments, like the marimba for example, into deep-tropical sets. If you’re not already aware of their music, picture a hybrid of Kygo and Manic Focus. (which on a side note, a collab between the three would be real awesome. Manic and the Autograf dudes are already living in Chicago. Make it happen…) Definitely recommend catching their set if you want to hear an original live spin on some tropical and deep house tunes.

If you’re a fan of house music, in addition to Autograf, Amtrac and Landis LaPace are also on the bill and bound to provide your soul with some heavy bass vibes. Peep the track below to get a sense of “The Heat” Landis LaPace is about to bring to the stage. (These weather puns are too easy…)

XXYYXX the 19-year-old producer behind the famed track, “About You,” with the ill music video of the hot chicks smoking in super slow motion, will grace the stage as well and hopefully play a bunch of original and futuristic beats for us. His unique experimental style will provide, to say the least, a very interesting set. Don’t expect to hear all slow and ambient tracks though, as the producer/DJ always tends to keep it trill and turning up with some of the hottest hip-hop and trap anthems out to date. Watch “About You” below to get a feel for some original XXYYXX. Definitely be sure to catch Liquid Stranger and Minnesota,who will bring the much needed bass throughout the evening while Herobust and Paper Diamond will supply us with their own signature trap sounds. Branx will fulfill all your Lowtemp needs as well. And of course don’t forget to bring some chips for that salsa music we hope to hear from Simon Posford’s DJ set aka Sphongle.

Bang On NYC Elements Music & Arts Festival, we are ready for you!

Tickets can be purchased through EventBrite.

Preview by Kyle Miller of The Saucy Monster