So many tippies. From the moment I arrived to the lot, there were a bunch of familiar faces. As expected with a set date for this party announced almost a year ago, (flyers got passed out after Tipper’s set at Sonic Bloom last year), I ran into people I’d met from across the country all seemingly seeking the same things; arguably the highest quality audio/visual experience available and some of the most loving vibes you’ll find anywhere. The amount of people I spoke to all had similar things to say about the show Tipper put on; from it being somewhat of a religious experience to Tipper himself being a God or an alien. This leads me to believe he is on the verge of unearthing the beginning of some serious new soundscapes and ways of approaching music composition for the future.

I made my way into the venue shortly after the skies showed promise of staying clear (thanks to Tipper’s sacrifice of blood to appease the weather gods the night before) for an elegantly mind twisting downtempo set from the Tipper, which was accompanied by the legendary Alex Grey painting and getting down to the side of Jonathan Singer’s visualizations. Pulling out new tracks and mixing in a way only a vetern producer with that much prep time could achieve, the crowd was left teased by Just The Tip. Next on the stage came Quixotic, who always create a very unique experience for their viewers. With beautifully crafted song structure and live instrumentation backed by aerobics and fire, the crowd was definitely satisfied. 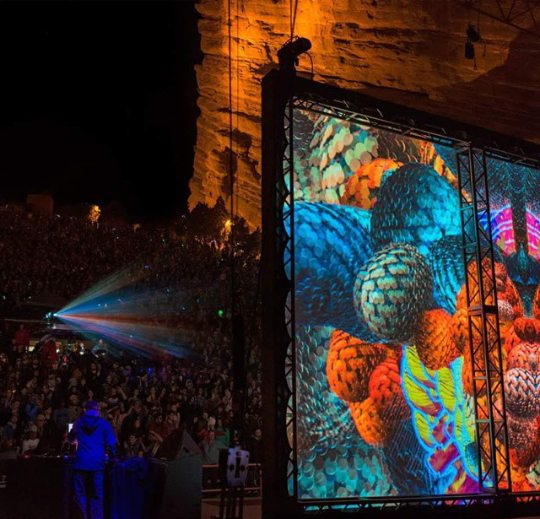 Shifting things into a squishier direction, Ott took stage picking up the pace for the evening by laying down some clean yet dirty worldly beats for the elevated crowd. With another pristine and polished producer came some pretty awesome visuals that were very dialed into the vibes of his set as well. And lastly, Dave came back to the stage accompanied with one of the world’s leading visual artists, who also happens to be a Colorado native: Android Jones. In ways similar to Tipper, Android Jones pushes the boundaries of what his art can be by educating himself extensively on everything relevant to producing the highest quality final product.

Dropping copious amounts of unreleased material and setting a new high standard for sound design with every show, Tipper upheld his burner throne to the crowd who could do nothing but be left in awe. As we funneled back down to the parking lots to reflood the city and spread out at some of Denver’s favorite warehouses til the sun came up, I was left appreciating the devotion of these highly respected artists and their ability to draw such a huge crowd of conscious, like-minded people for just one night. It’s always great to see and feel the love in the air as thick as it was that night at Red Rocks. One for the books.