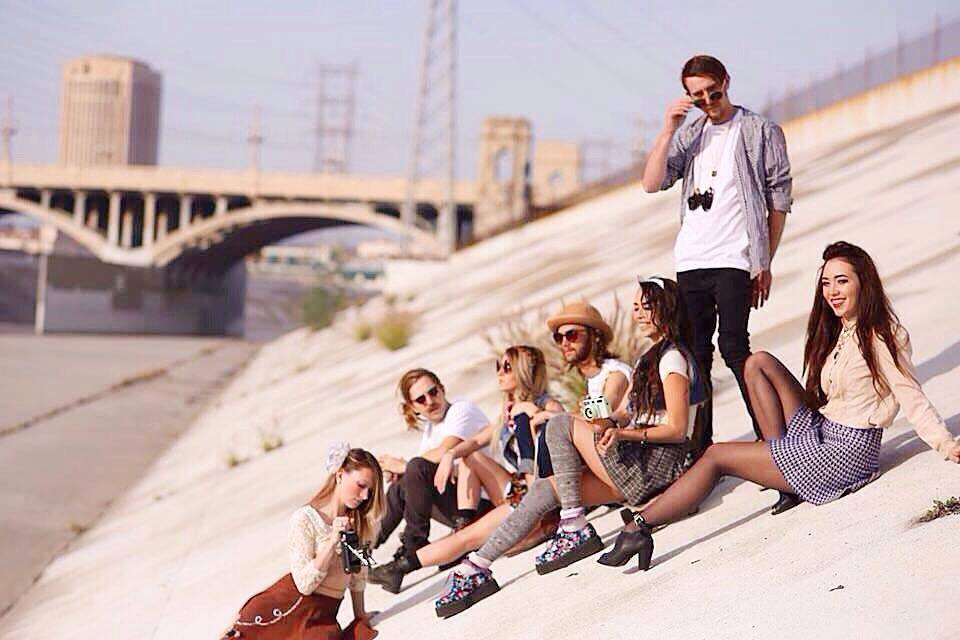 Who are the Imagine Nation, you ask? They are a band of dreamers and do-gooders. A band of people who are hard working, passionate, and forever waltzing with their heads above the clouds, inspiring, creating, and always celebrating the perils and successes of life. The Imagine Nation are unlike anyone we know, because they are simply themselves. If you’ve done some traveling throughout the festival circuit in the last few years, chances are you’ve seen their work. From creating towering art installations to completely up-cycled stages and the quirkiest of hidden rooms, these guys never fail to have a full bag of shenanigans up their sleeves as well. Instilling pure intention at the core of everything they do, this group pushes the limits of the art world as we know it. Creative in the stunning work they produce and the lives they change, the world could use more of the beauty this group brings. 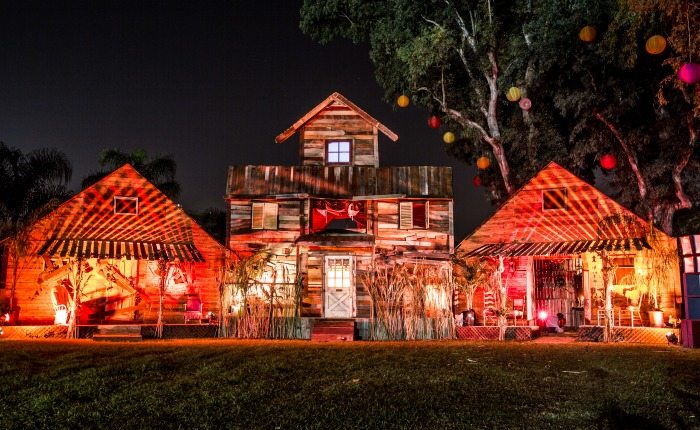 Initially discovering the first seedlings of what would become Imagine Nation at Electric Forest in 2013, I quickly fell in love with the strange and magical world they’d conjured, and have been following their adventures since. I was able to grab an interview with some of the group’s founding members, Prescott McCarthy and Kirill Simenchi, to learn more about the creative process behind building some of the most inspiring installations of the festival world.

Can we all grow up to be like the Imagine Nation team?

My first exposure to your craft was in Michigan during Electric Forest 2013, with the Jenkstars. What would you say has changed or evolved since then?

Since last year’s Electric Forest we have grown in the fields of design, carpentry, performance, media, and of course, running a business.  Our passion and dedication has grown as well. We have gone “All-In” as we like to call it. Fully committed to the team that we have built, and our purpose.  We take great pride in our work, and the process of turning trash to treasure with our all reclaimed material installations.

Why the split from Jenkstars?

It was a simple process of mitosis, growing to a certain point before you have to become 2 separate cells.  Collectives are filled with all sorts of creative and goal-driven people, and it’s a great way to complete a common goal in a shorter amount of time. But with more people comes more pull in different directions, because people all want different things. It was clear at a point that a change needed to be made, and a healthy split was the best option for all. We still love and support the Jenkstars, and many of them have come to work on Imagine Nation projects, so we look forward to the rise and growth of both collectives in the future. We will never forget our Jenkstar roots, and have mad love for that whole amazing family.

The new logo for Imagine Nation is a hexagon, with one of the slices slightly parted from the rest. What’s the meaning behind it?

We put a lot of thought into our new logo, simplicity, iconography, the golden ratio, inner meaning…  It’s a hexagon, but it is actually a pencil from head on.  The pencil represents the moment of creation. Taking an intangible thought that was in your mind, and putting it down on paper into a tangible reality.  Be it a poem, lyrics, a drawing, or blueprints to an installation.  The piece parted is a pencil shaving, meaning progress.  Some see it as that piece being you, the last piece to the puzzle. 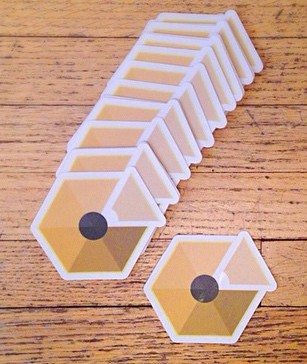 How did you initially become contracted by Insomniac?

We met the Insomniac team at Electric Forest 2014, where we built the Globe Theatre.  But It was deep in the forest behind the secret triple door speakeasy, with a little help from Lauryn Hill where we really hit it off.

What was the first spark to ignite your creative path?

It was the world of festival culture that brought us all together, and the enjoyment, and satisfaction we found in working hard to create something that people would enjoy.  From day one it was always about that “spark” of inspiration and the drive to do something about it.  It doesn’t matter what it is your creating, but having that excitement to wake up and make something is as good as it gets.

What’s the creative journey like when going into a new project? You guys go beyond simply building – using only upcycled materials, coming up with certain quirks and shenanigans for different events, creating different characters and roles –  It must be a process!

Ahhh, the process. I wish I could lay out a formula for how it’s all done, but a lot of times our process is dictated by a few key elements. Mainly time, space, material found. We’re a new company, with no warehouse, so a lot of last year was spent running around building things in friends backyards, parking lots, and on-site. We always have a rough sketch of what the structure will look like, and the theme  of our characters is thought of and practiced beforehand…but the actual structure a lot of time comes out a bit different than what it looked like on paper. This is honestly the fun part, because we are not limited to building something one way, we always have to ingenue new ways of creating things. It puts a little more stress on us, but allows our imagination to flow freely.

The most fun you’ve had during an installation?

The most fun? Hmm. My personal favorite this year was at Electric Forest, when we starting “checking wristbands” at our ticket booth with a Ryobi drill battery. At first attendants would walk by us and either give us a quizzical look of “Am I allowed in here?” or flat out just ask us. We couldn’t just say no or yes, that would be too easy…so we let the Ryobi battery decide. As people would walk up, we’d put the battery to their RFID chip and give them a loud “BEEP!” from our mouths. Others would see that wristbands are being checked, and started forming a single file line to get in…even though there were 5 other un-manned entrances it would still create lines of people waiting to get “BEEP-ed” in. The best part came when the last person in the group would finally figure out the ruse and point it out to their other friends. That expression of “Oh, you got me.”…priceless.. 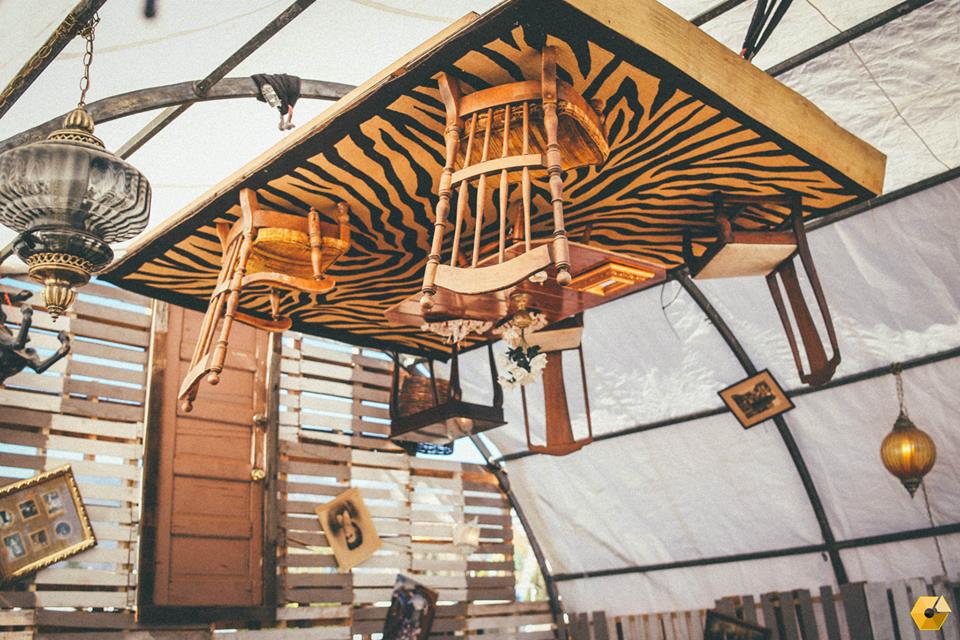 The Upside Down Room, another festival creation by Imagine Nation

The past year as a whole was the most challenging. Going ‘All-In’, and not having any sustainable income – being on the road, working hard and exerting all energy into a single focus. It was a challenge, it tested the limits of us as friends, creators, and business partners. Every festival, every project, was another chance to test our commitment because it was all on us now, all the responsibility. 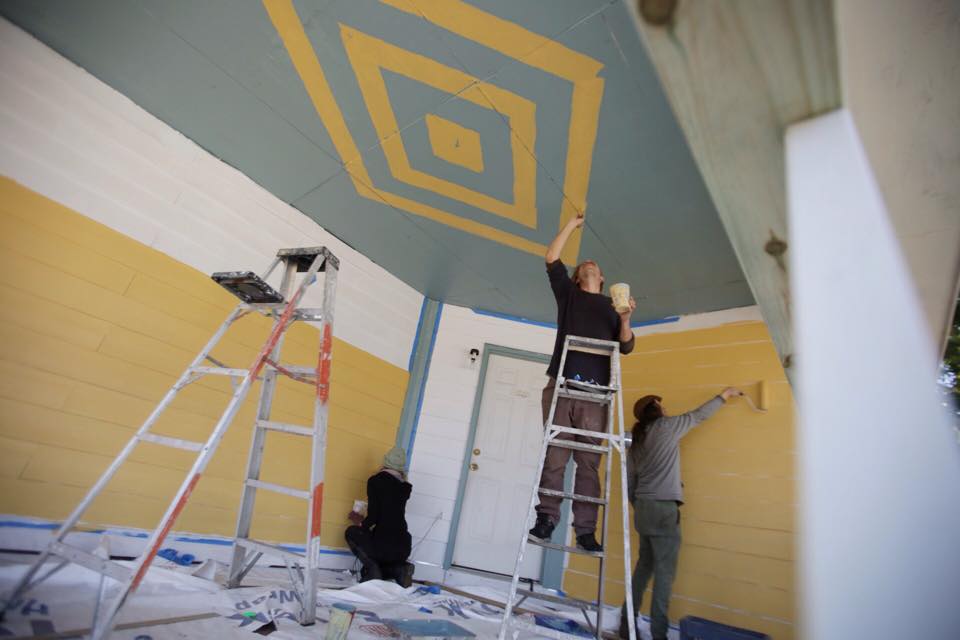 How did you get involved with Rebuilding New Orleans? Any other projects in the works with them or other charity organizations?

We got together with Rebuilding New Orleans by chance.  Our plan after EDC Orlando was to drive to NOLA and create something new and beautiful out of a building still effected by Katrina. Not knowing exactly how it would shake out, just knowing we wanted to do something more meaningful, & more permanent. We met Rebuilding Together and teamed up to work on granny Ina’s house. We kicked off the start of a much bigger rebuild they would be doing to the whole house. We’re now currently in the works of some similar projects in the Los Angeles area.

After watching the recap video from Imagine Nation’s work for The Deconstruction, I can only imagine how it felt to be someone’s real life hero. How was that experience for you?

Rebuilding a part of Granny Ina’s house was very special to us. It was the first time we got to take our skills and use them to benefit someone so directly. I feel like we change lives all the time at festivals, but it’s a different kind of life experience…helping someone fix their home, one-on-one, and seeing the reaction they have in your work just feel good inside.

It’s obviously clear you guys aim not only to instill a sense of sustainability and awareness in festival attendees, but to have good, clean, fun as well. EDC Orlando saw you guys bring back elementary school games such as spontaneously pitching a Parachute Tent, and making random volleyball matches in the middle of Neon Garden. What do you think this playful and creative outlet brings to the festival scene?

We bring in the characters, the games, and the crowd interaction because we want everyone to feel like they aren’t just going to a show, they are a part of the show. Bridging the gap between the “glorified DJ” and the spectators.  We consider our zones “Community Stages” reminding people why they’ve come… to be part of a community. And the more people feel involved instead of just attending is what we strive for. 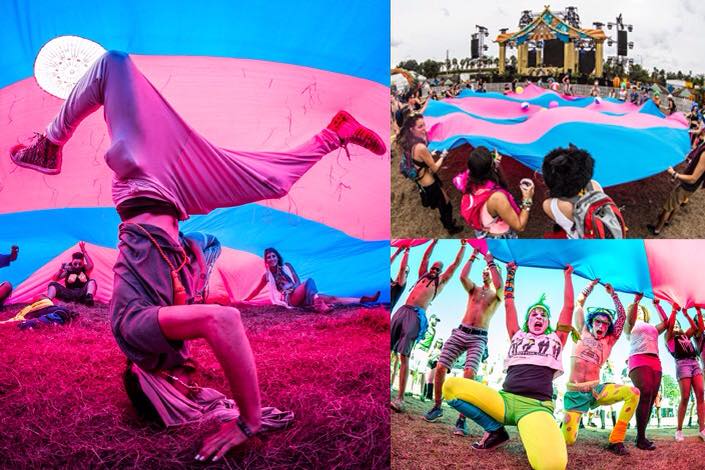 A good game of Parachute Tent, hosted by the Imagine Nation at EDC Orlando last year.

What should we keep our eyes peeled for in 2015?

2015 will be big year indeed. We’ll be working closely with Insomniac bringing our magic to many upcoming events, and our Electric Forest project is going to be big, new and exciting this year. We have a reality-style YouTube series coming out, and be prepared to start hearing more music from us! Outside of the festival world we’ll be involved as much as we can with the underground LA art scene, and putting more energy into permanent builds, and “ARTchitecture”.

Keep up with the Imagine Nation’s projects throughout 2015 by following them on social media!