The sequel to the Xbox 360/Ps3 cult hit Bayonetta is finally out exclusively for Wii U! Even better, it comes packaged with the original game as well a remastered version for Wii U, complete with touch controls and Nintendo themed alternate costumes of Princess Peach, Samus, & Link. Each suit offers it‘s own special move, such as using Samus‘s cannon, blocking with Link’s shield, or summoning Bowser’s fist through the infernal weave. The cut scenes retain the same style from the original game, alternating from fully 3D animated scenes to short cuts that explain the scenes quickly, but where this game really shines is the in-game visuals and combat. Bayonetta has a few new abilities as well, such as the power to transform into a panther to move across larger distances, or an owl that has a flying attack. 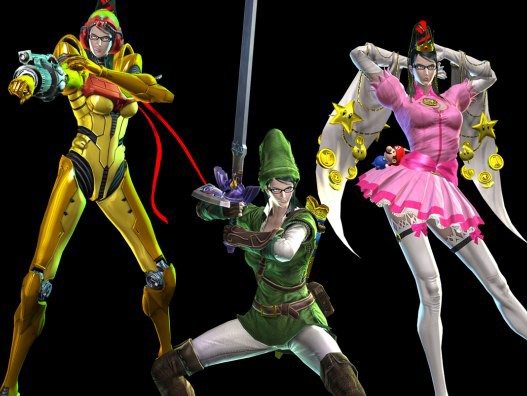 She also gets to pilot a mech suit briefly. She has her signature pistols in her hands, as well as attached to her heels, but can also acquire other weapons, like a whip that gives you a very long range, her Rasetsu swords in your hands and boots, flame (and ice) throwers, a wicked dragonfly bow and arrows, or alternate handguns. You can also mix and match which two sets of weapons she uses so that you always have access to 4 of them and can change your setup any time to match your enemies. You might get through the game on easy by mashing the hell out of the buttons, but to really get the full experience you’ll have to master a number of moves, most importantly dodging at the last second to activate Witch time. Then you can pull off a series of attacks while your enemy moves in slow motion for a moment. 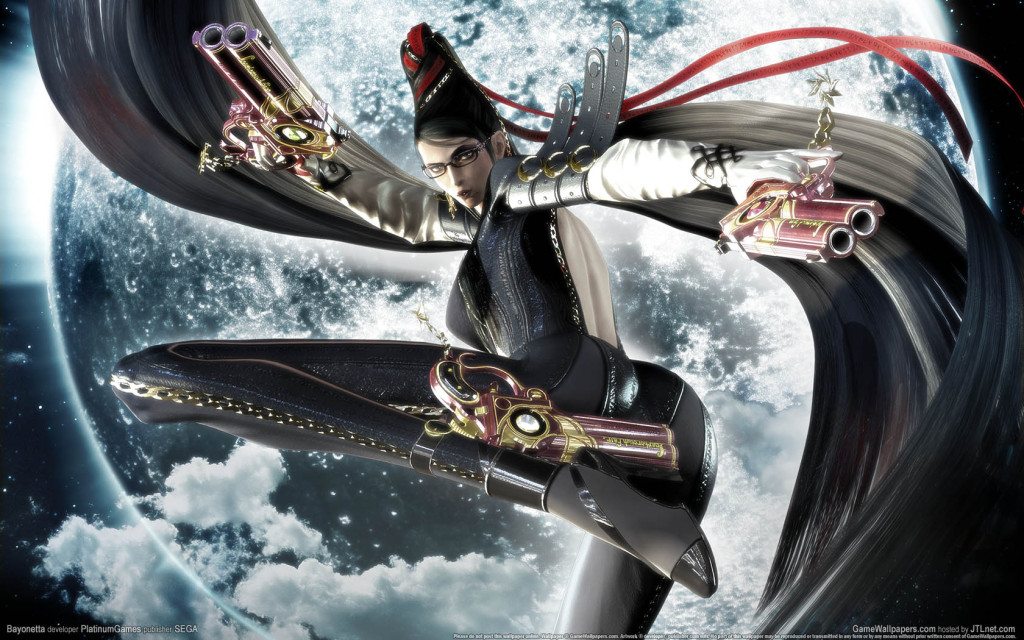 The infernal weave ability returns as well, allowing her to summon demonic monsters, giant fists, and massive high heel stomps from her hair somehow. Bayonetta also returns with her torture moves, where her enemies meet a gruesome end as she summons guillotines and meat grinders to dispose of her angelic enemies. While I found this game to be fairly challenging, I did manage to finish the main story in just a few days on the first climax setting, and the value this title offers isn’t really in it’s sixteen chapters, but going back to replay them to try and get pure platinum ranking, where you beat a stage without being touched, as well as all the extras you can unlock. The graphics in this game are easily the best I’ve seen so far on the Wii U and definitely shows the consoles’ potential, though the textures in some of the cut scenes seem to be lower resolution than the actual in-game visuals. The high points in this game are the boss battles, which alternate between the forces of good and evil. From angelic creatures with giant faces for bodies, to killer robots shooting lasers and circular saws, to demonic dragons from hell, the boss fights in this game are truly epic. My favorite battle features the Lumen Sage, a masked character dressed all in white and gold looking something like a next gen Soul Caliber fight. Like their first title for Wii U, the Wonderful 101, Platinum games has made an over the top game with intense action and visuals that could very well earn Game of the Year. 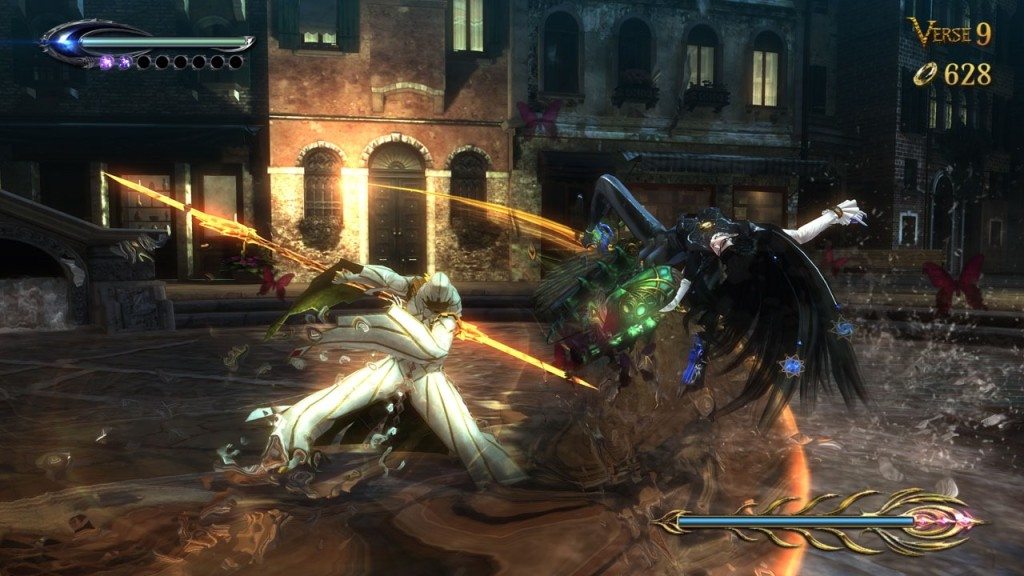 The many battles that take place between the Lumen Sage and Bayonetta are epic.

The ability to play with a stylus is a nice touch, but one that I found unnecessary, preferring to play the game on my new classic Game Cube controller, which seems much more capable of withstanding the abuse of me furiously mashing buttons to attack and dodge. Other than the stylus input, the game offers very little to exploit the full control inputs possible with the Wii U explored in the Wonderful 101, but what it lacks in innovation it more than makes up for with stunning visuals, giant bosses, and classic as well as pro controller support, in addition to the game pad. You may have noticed I have told you almost nothing about the story, because it would be hard to describe without lots of spoilers. I will say the content is a little heavy, dealing with the forces of good and evil, but nothing new to mature video gamers who have played the original title.

If Nintendo hadn’t stepped in to fund this game as an exclusive to attract mature players, it would have been cancelled, so don’t expect it to be ported to other platforms any time soon. With Nintendo recently announcing they are profitable again, and the unexpected success of Hyrule Warriors, let’s hope there are more mature titles in the works that haven’t been revealed yet. Overall, I found this title to be visually stunning and decently challenging, as well as very satisfying to play. Even after seeing all the story has to offer I am still going back to unlock more costumes, characters, and items. I give it a 9/10 score.