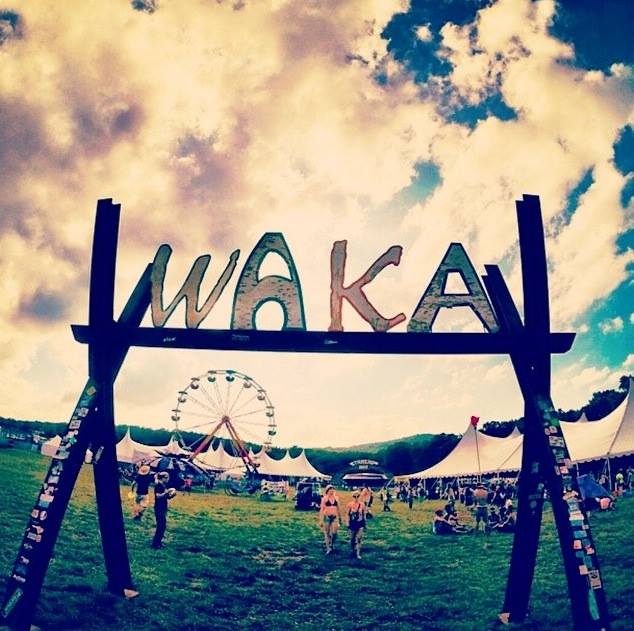 To say the magic of an organic festival scene was alive and well atop Mulberry Mountain would be a severe understatement, as the weekend I spent at this year’s Wakarusa Music Festival felt as though an entire alternate universe had opened up; the land almost beams with remnants from a past time. Wakarusa successfully embodied just what a jam-band/electronic infused festival in the mountains should feel like – a blissfully rowdy experience unlike any other. The overall and consistent home-y vibe that camping festivals are revered and cherished for was in full effect as well, making the Waka crowd by far one of the nicest I’ve had the pleasure of being apart of! In addition to featuring longtime musical giants such as String Cheese Incident, Bassnectar, Flaming Lips and several others, there was a fair amount of under the radar acts balancing out the roster as well, making the weekend one big Easter egg hunt for the best talent on the grounds. While I thoroughly enjoyed the headliners I had traveled to see, I was left in pure awe of the underground talent Wakarusa had provided, and several of these acts blew my mind to pieces.

As difficult as creating this list was, I managed to compile my top favorite acts of the weekend, focusing a special emphasis on non-headlining acts. Wakarusa served as a big reminder that, although you’d love to make time for your favorite artists, there is no better reward than stumbling upon the acts that were previously unheard of to you. Those smaller names you’ve never listened to? They’re just artists you haven’t fallen in love with yet. 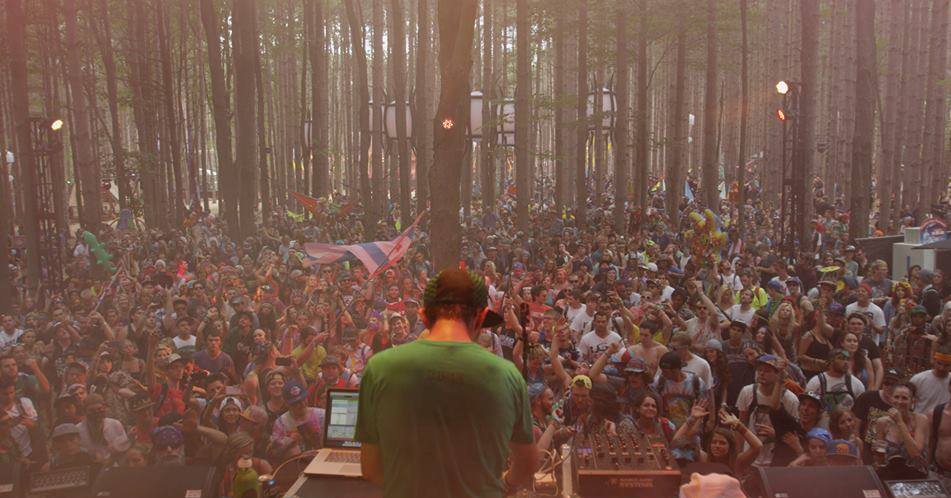 Hailing from the streets of Chicago, John ‘JmaC’ McCarten goes by the moniker of Manic Focus, yet a more appropriate title would be Man of the Hour, in regards to the vigorous set he threw down on Thursday at the Satellite stage. Playing to a mass of hyped up bass freaks, Manic Focus served up just the kind of fun, soulful and progressive tunes that the crowd craved, the energy coming to a peak as he dropped an incredibly heavy remix of Kendrick Lamar. Towards the end of his set, he surprised the crowd by bringing out guitarists Kevin Donohue and Andrew Clymer of livetronica band Sunsquabi, to perform with him as well. After recently being signed to GRiZ’s Liberated Music label, there is no doubt that Manic Focus will soon be the name on everyone’s lips, as he is already making impressive progress in the scene.

J Roddy Walston and the Business

To put it lightly, this four piece from Baltimore is pure rock and roll at its finest, a scarce find among the music scene today. Their live show stopped me dead in my tracks, making an early exit an impossible option. It’s always special to come upon a uniquely robust and enthralling band such as J Roddy Walston and the Business, and their stage presence absolutely crushed the Revival Tent on Friday. Featuring an eccentric display of proficiency from each member, the entire show was a spectacle, all the while Roddy Walston pounding on his piano keys so hard I was convinced a key would fly off into the crowd. 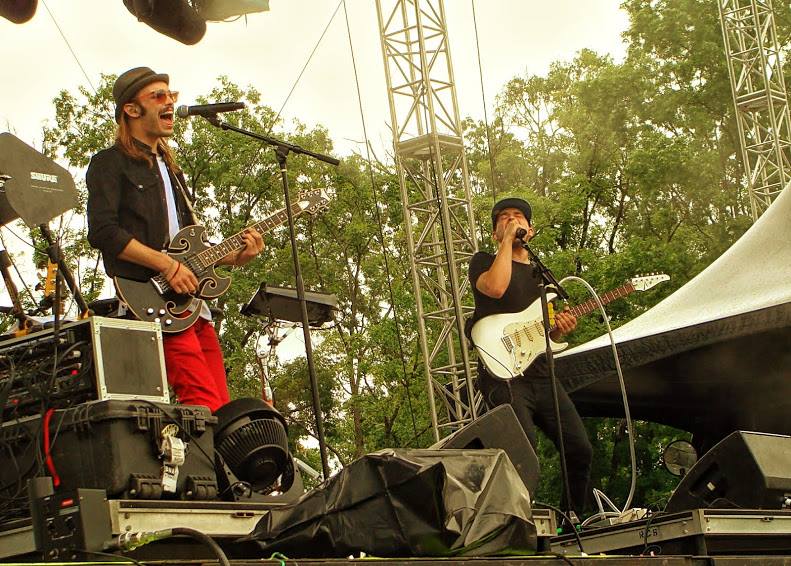 Cherub hitting the main stage on Saturday of the festival. Photo by Tai Carpenter

Just putting on a pair of headphones with Cherub blasting through them will send you into a funky, hilariously romantic daze that simply tantalizes. The undeniable charm that this Nashville born duo gushes is unparalled – they always leave you wanting more. Seeing them live conjures an imaginary but very real visual – I can perfectly imagine these two as young boys putting on concerts in their living room, giving their best Prince impressions and crooning into makeshift microphones. It’s rare to find an ebullient and passionate band such as Cherub; their performances are not to be missed. 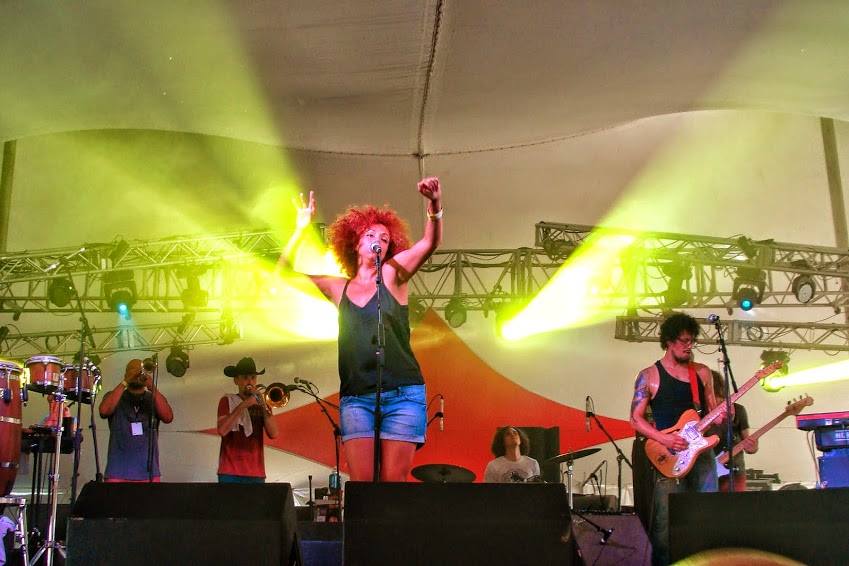 Orgone getting funky in the Revival Tent. Photo by Tai Carpenter

Stumbling upon this neo-soul/afro funk band was musical bliss to my ears. Soulful and mesmerizing, Orgone completely won me over as I joined the crowd in dancing frenetically to their set. Rocking a powerful demeanor, female vocalist Adryon de León lit up the crowd as she transcended the stage through her contagious energy. Fortunately, Orgone played two full sets at Wakarusa over the weekend, allowing me to get two doses of funkified freshness. With their larger than life personas packing out the stage, I cannot wait to have the chance to experience their explosive live show within a more intimate venue. 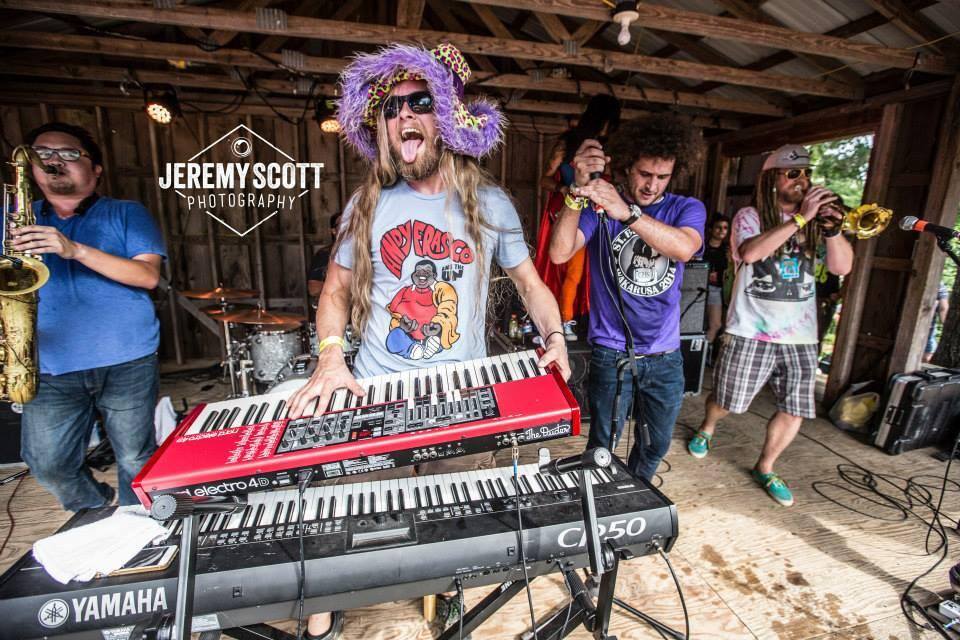 Bringing the vibes to the Backwoods stage was Andy Frasco, a five piece band that are certified in bringing a funky reggae party to any stage they step onto. Fronted by pianist/vocalist Andy Frasco himself, along with saxophonist Ernie Chang, bassist Rens Ouburg, guitarist Shawn Eckles and Bizzy on the drums, this powerhouse of a group make for a heavy duty live experience. Accompanied by members from Spoonfed Tribe, their set was a boisterous blend of harmonic funk and jazzy influences, all topped with boundless energy that didn’t let up. Coining their specific sound as ‘party blues’, Andy Frasco turned the stage into a total party, and the crowd went wild.

Opening up the Grassroots Outpost Tent on Friday, Air Dubai is defined as hip hop, but that would only scratch the surface of what this six piece is really capable of. Blending a variety of genres including hard rock, jazz, indie, and poppy synths, this band is truly unique in their own right. Known for their highly energetic live shows, there was no sign of slowing down during either one of Air Dubai’s two performances at Wakarusa. The band revved the crowd up with their pure charisma and exuberant stage presence, and after being signed to Hopeless Records and joining the roster for Warped Tour this summer, it’s clear to see that 2014 will be nothing short of a very good year for Air Dubai. 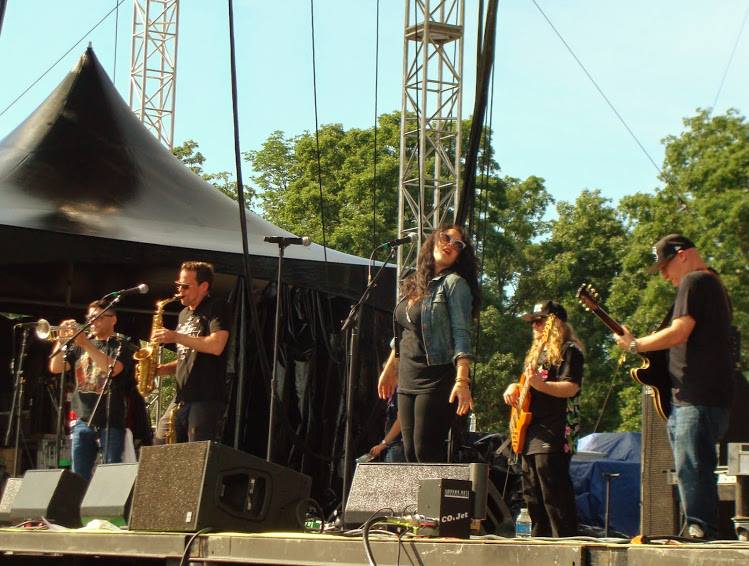 Lettuce on the Main stage. Photo by Tai Carpenter

Hailing from Boston, Lettuce is a seven piece full fledged funk band that surpasses the standard for live music that festival goers have become complacent with. Each member of Lettuce bursts with their own unique eclectic skills, creating an invigorating blend of saxophone, percussion and trumpet. Alecia Chakour lent her dulcet and soulful vocals to the show, somehow making the hard hitting set even better. During the length of their performance, I came to the realization that Lettuce is just too talented – It’s clear to see each member is a complete master at their craft. There are few harder working bands in the music scene than Lettuce, who have been playing together for over 20 years, only upping the ante when it comes to their musical expertise. We’ll have the ultimate pleasure of covering their set at Bonnaroo this weekend in Manchester, Tennessee, where they’ll be collaborating in a legendary performance along the likes of Chaka Khan, Karl Denson, Ben Folds, and more!

It’s no easy task to keep the party continuing into the late hours of the morning, especially at a festival that has been going hard with music, workshops and activities since before noon that same day. Yet Hayden Kramer, aka HeRobust, took to the challenge with ease and performed a compelling set full of bass-riddled tracks. Lighting up the Satellite stage, HeRobust was relentless in his song selections, dropping smooth transitions and fan favorite bangers, no doubt being hyped up by the magnitude of his audience’s energy. Needless to say, this is one of the only late night sets that I caught over the weekend, as I am pretty much a waste of space without sleep. HeRobust went above and beyond the call of duty, and delivered nothing less than a truly rowdy set. 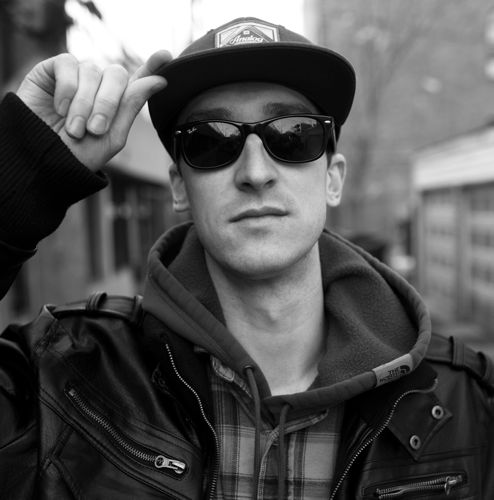 Refusing to limit himself to the confines of ordinary hip hop, Colin ‘ProbCause’ Grimm’s confidence dripped from the stage at the Grassroots Outpost Tent on Thursday evening. He had the entire crowd swaying back and forth to every track, hanging on every verse that left his lips. Backed by live drummer Ben Cofresi, ProbCause’s performance was seamless, motivating me to dig through every mix he’s ever touched. One listen to ‘LSD’, his track with Chance the Rapper will have you hooked – melodic overtones, big brassy instrumentals and of course, the slick flowing style of ProbCause himself, all make for a musically diverse masterpiece that you will keep on repeat for weeks. His newest release, Waves, is a collection of consciously crafted hip hop tracks stacked with floating female vocals, which will no doubt propel this rapper to the top of the scene.

The Funk Hunters brought the boogie to the Satellite stage on Saturday, where they brought the crowd up to speed for those who may have been unfamiliar with the six piece Canadian funk force. Dropping delectable remixes of songs from a span of different eras, The Funk Hunters held the crowd’s undivided attention for the entirety of their hour long set, without ever having a dull moment. Implementing live horns and an MC to their double performances over the weekend made for a groovy experience that was out of this world. I am now officially hooked on The Funk Hunters, and can’t wait to see them again here in the States. One look at this video from their Shambhala set in 2013 will show you exactly how these guys get the party started!