Denver musician Jordan Polovina has more tricks up his sleeve than your favorite MC. 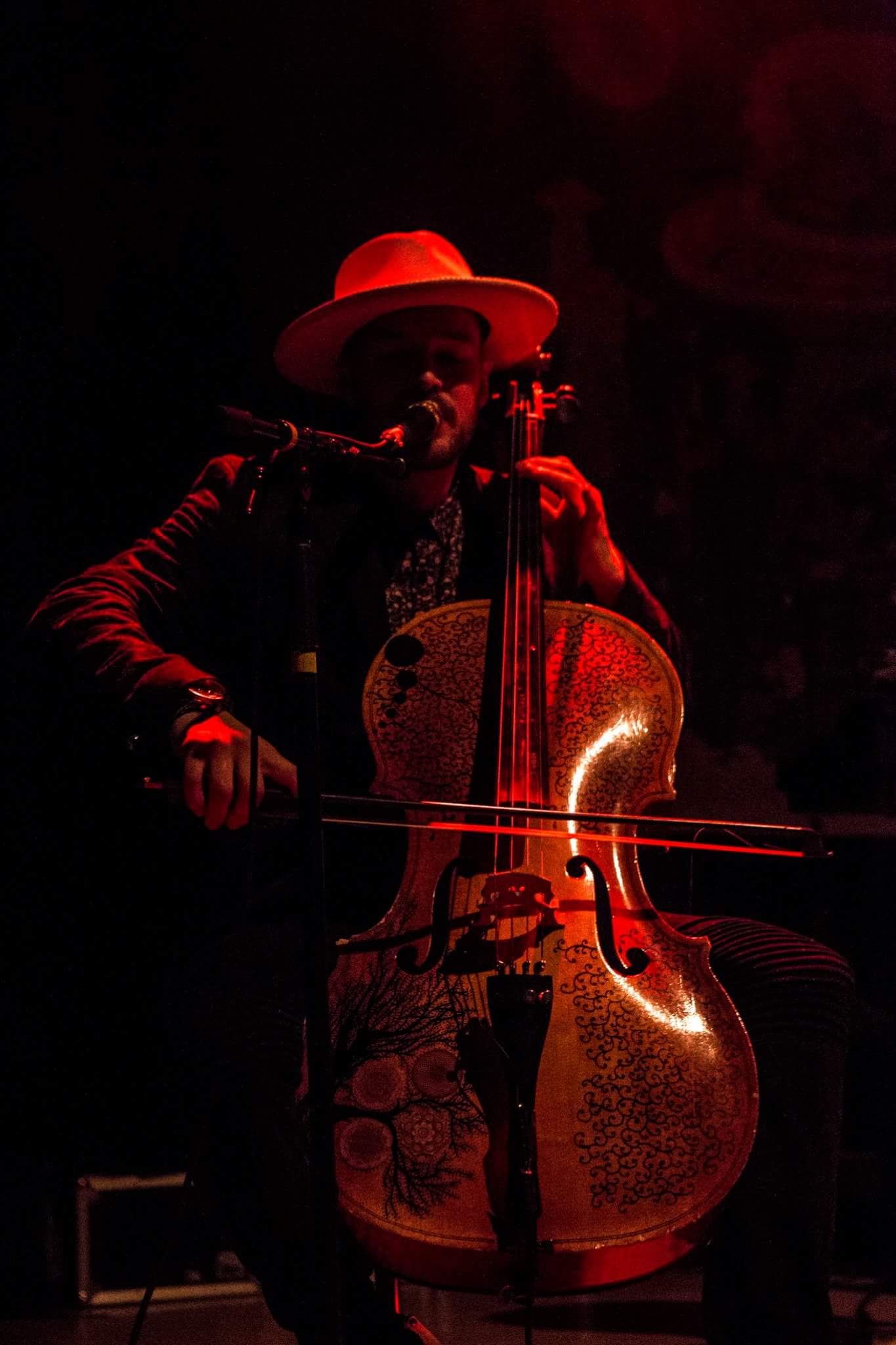 Colorado artist and Cervantes Re:Search Wednesday resident Jordan Polovina is far beyond just a rapper. The mic torching, cello rocking 16+ year industry veteran is a part of a plethora of musical acts and has also put out a strong collection of singles as a solo artist. Earning his stripes from a young age, teen Jordan dropped out of high school to pursue music with his folk-hop group Whiskey Blanket. Young Jordan and his crew toured nationally over the following years, introducing him to many of the key industry players he considers teammates now.

Hosting Euphonic Conceptions’ weekly Re:Search Wednesdays, Cervantes resident Jordan Polovina has continued to make a name for himself by treating the crowd to seasoned cello playing, improv analog drum pad beats, and crowd engaged freestyles that literally submerges him into the audience. 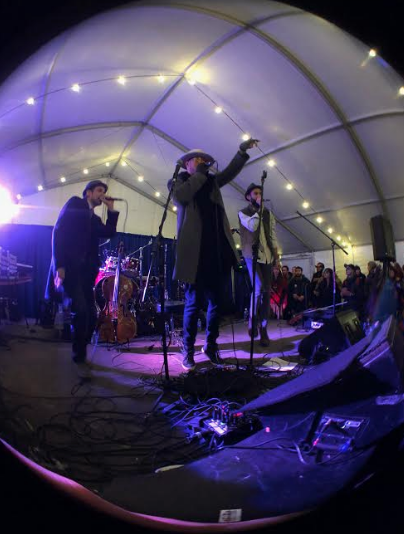 Before one of his weekly Re:Search Wednesday sets, Jordan sat down with Compose Yourself to talk about his experience in the music industry, career highlights and plans to dive deeper with his solo act.

Compose Yourself: What was your introduction to the Denver music scene?

Jordan: Well, I started in Boulder with my group Whiskey Blanket; I was still a teenager. I played on campus at CU and ended up at the Fox Theatre. We did really well there, actually, and started growing a strong fan base early on. I guess that pushed me on to Denver to play venues like Cervantes and other places. So yeah, I would say my introduction to Denver was really through Boulder.

So you were a teenager when Whiskey Blanket was formed?

Jordan: Yeah, I was still in high school when we came together. I would say we became a more serious group about a year after that. We just started playing as much as we could – we didn’t really know what we were doing. We were just having fun and playing music, but it was definitely a cool chapter. Definitely my introduction to performing in Colorado.

Have you guys toured much outside of Colorado?

Jordan: Yeah, we’ve done a good amount of national touring. We still have some good fan bases – we do the Boats and Bluegrass Festival every couple of years in Minnesota. That was always cool because it’s like a three day bluegrass festival and when some stringed hip-hop group would come up, it was always a blast. But yeah, we’ve been around – through the midwest and here and there, we gave it a national shot for sure.

What inspired the folk-hop sound?

Jordan: We were a bunch of underground hip-hop kids that were listening to mostly just hip-hop at the time. We kinda all just realized that we have these other instrument skills outside of rapping – you can play violin, you can play cello, you can play piano…and it was perfect. We just decided to roll with that and start having fun with it and people started to gravitate towards it. It was something kinda different and newish and people liked that.

When did you start playing cello?

Jordan: I started playing cello back in Pennsylvania, through my step-dad. I would go to orchestra recitals with him and I would fall asleep 100% of the time about two minutes in. But he took me to one in particular that was a solo cello recital and I was glued. After that I continued to show interest in the cello, I had a great teacher – a German guy named Dieter Wulfhorst. I was young and that whole experience was amazing; I had a huge spark for music at that time and having him as a teacher made a huge difference.

Can you tell me a little bit about Grim&Darling?

Jordan: Yeah, Grim&Darling was a fun group. It was kind of a rough situation between her (Jessa Raskin) and I; we tried to date each other and so things kinda fell to the wayside, but we try to stay on good terms. We’ve done a few shows since then, we did a show with Farside at Ophelia’s somewhat recently and that went well. I kinda pushed everybody away because I really want to focus on this solo music for a long time. So as far as all the group music goes, I’ve faded away a little bit. Hopefully they don’t hold any resentment against me for it.

Tell me about Glitta Kings.

Jordan: Glitta Kings was what I would call the funnest summer project. That was at a time when I just wanted to have fun and party and make people laugh, explore that side of music – just kinda joking around. We made a couple videos that were just plain fun, it was just fun man.

Who were the members?

Jordan: Quinn Lynch, who is 5ve now, he’s with Universal Language – they have some great artists over there. I’m in a partnership with them, so I’ll be working with them in the future. Jessica Jones, who is a powerhouse female vocalist. She plays at El Chapultepec regularly, I need to catch one of her shows there. I really want to bring her in for one of these (Re:Search Wednesdays) sometime soon. She’s really great. Emma Badman who’s Sassfactory, her stickers are everywhere – she works really hard. Everyone in that group has really moved on to do some really great stuff on their own, so that’s really great to see. Also, Jessa from Grim&Darling is in a group called Minor with Sam Goodman, who I’ve played with in Michal Menert’s band. Everyone’s really pursuing their own vision, which I think is really good and necessary at this point. And if any of us are really hungry enough to make something happen again, everyone has been really supportive of that.

That leads nicely into my next question – what is your role in Michal Menert’s Live Band?

Jordan: You know, I just kinda come in whenever he’s around and wants me to play. That’s like my favorite band. I love him, I look up to him big time, and I love playing with that band, so anytime I have the opportunity, I jump on it. I did record some stuff for him; I’m not sure how much of that he will use, but I’ve definitely sent over some strings that I’ve recorded at home. But yeah, whenever he hits me up, I’m there.

What was your introduction to rap music?

Jordan: I have to say Wu-Tang Clan was probably some of the first rap that I heard and liked. I would like shun anything mainstream in rap – I’m much more open minded now that I’m older. But back then, I really found myself into the underground stuff – Sage Francis, Atmosphere, DJ Abilities, I could name a hundred more. What was wonderful about that, I got super into these groups, and really not much later got to actually play with them. I played with Eyedea and Abilities at the Marquis in Denver with Whiskey Blanket; that never goes away…it’s always there and that was an amazing show.

What was the first show you played in Colorado?

Jordan: The first show I played was at Club 156 at CU. It was called Club 156 because it only held 156 people; it was just a little side performance room. We sold like 230 tickets; they were surprised. We had a really nice push for that first show and were actually playing a bunch of house parties at the time so we already had a decent following. It all happened really organically and naturally, it was really fun.

What was your favorite show that you’ve performed in CO?

Jordan: That Eyedea and Abilities one at the Marquis was definitely notable. Grim&Darling with Jurassic 5 at Mishawaka – can I name a few? Living Legends and Hieroglyphics at the Ogden recently was a really really great one. Every Wednesday and anytime I’ve ever played with Chali 2na is my favorite show. I’m supremely grateful, I like talking about stuff like this because it reminds me of all the amazing moments I’ve had in the industry over the past 15 years.

Who are your 3 favorite current rappers?

Jordan: Sage Francis, Homeboy Sandman – if anyone is reading this and hasn’t heard his stuff, The Good Sun is an album in particular that’s so incredible, the dude is electric.

Jordan: Cervantes, either side.

Jordan: Create, create, create. See through this Re:Search thing. Meet people, sit in, collaborate. Finish the album, print the album, master the album, merch, content, videos, management and booking hopefully. Build a team. I want to be serious about making this a business. Just doing everything to keep my focus on building the business while making as much music as possible.

Anything else that you want to mention?

Jordan: You know man, I think it’s really just about keeping an eye out for each other. There’s a lot of love missing in this world. I’m trying to spread a little everywhere I can. I really want to do a lot when I have the opportunity to make a difference in the community. I think we can all be more kind and patient with each other, that’s all.

Thank you for taking the time to speak with me!

Check out Polovina’s solo stuff and follow his SoundCloud here. Jordan will be performing alongside Artifakts, Wax Future, Birocratic, and Mikey Thunder tonight (3/14) at Cervantes. Click here to buy tickets!