I got the opportunity to check out Tea Time and Dub Day on Oct 24th for a back-to-back Tuesday night party. Tea Time is run by The Saucy Monster (a.k.a Kyle Miller/IndoBeats) while Dice Man (Wade Appleton) puts together Dub Day. They are a short walk from each other in Queens, and are worth the weekday night out. Tea Time takes place at Trans Pecos and hosts down tempo beats, art, pastries and tea all night. This show is a chill early (7pm-11pm) Tuesday night option for people with regular full time jobs that still want to get down on a weekday. Make sure to come ready for dancing and tea, which studies show, might be better than alcohol for waking up the next morning. Tea Time hosts many different kinds of visual artists in addition to its music. 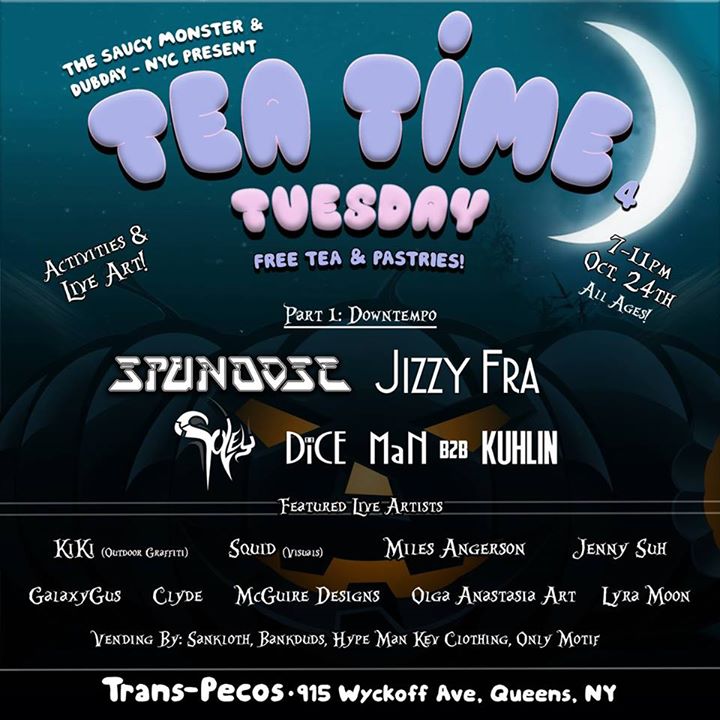 This weeks artist line-up included so many amazing artists that to write about them all would require an article in itself. I did manage to talk to and check out some of the artists in between sets. Miles Angerson set up a table of his Vile Tribe artwork, with trippy and intricate comics as well as beautiful complex drawings. Kiki Suss came out ready to do live graffiti on the back porch, but sadly the rain caused this part of the event to be cancelled. Jenny Suh Visual and Performance Arts showed up, indulging us in some awesome live painting. She also performs most types of flow and fire flow arts. The piece de resistance however were the live visuals projected behind the DJs that were performed by Liam McGuire of McGuire Designs and Jonothan Ortiz of Squid to the Word. Their trippy visuals captivated the crowd from Tea Time in to Dub Day.

On top of the artwork, Tea Time also hosts music. Kuhlin and DiCE MaN started off the night going back to back with some smooth down tempo beats. Nick Soley continued setting the tone with his chill old school anime/hip hop vibes. Jizzy Fra took to the stage after with his vibey subsonic bass rythms, dreamy tempos, and trippy brain scrambling melodies. He has played at all of the Tea Time events as well as Sub.Sermon and Nightmare festival most recently. Spundose then closed out the night with his unique tracks and production.

Following Tea Time was Dub Day at The Gateway from 10-4am, consisting of the same lineup but with all the artists playing up tempo sets. Kuhlin started off the night with a solo set, followed by Soley with some up tempo hip hop vibes. Spundose followed by playing his unique form of music, with lots of drip drop and trippy sounds.

Jizzy Fra followed this with a phenomenal performance. He threw down a slew of filthy songs, one after the other, even adding in a few of his own unreleased tracks (get ready for these!!). He managed to get the whole club on to the dance floor for his set, which was a lot of people for late on a Tuesday. Following Jared (Jizzy Fra), and closing the night out was DiCE MaN who also threw down an amazing set. His slow melodic bass noises soothed us up until his finale, consisting of awesome live vocal distortion and a long captivating spoken word poem. By the end of his set at 4am there were surprisingly still some people getting down to his music.

I highly suggest anyone that lives in or around the Greater New York City Area to check out all of the artists as well as  future Tea Time, Saucy Monster and Dub Day events.