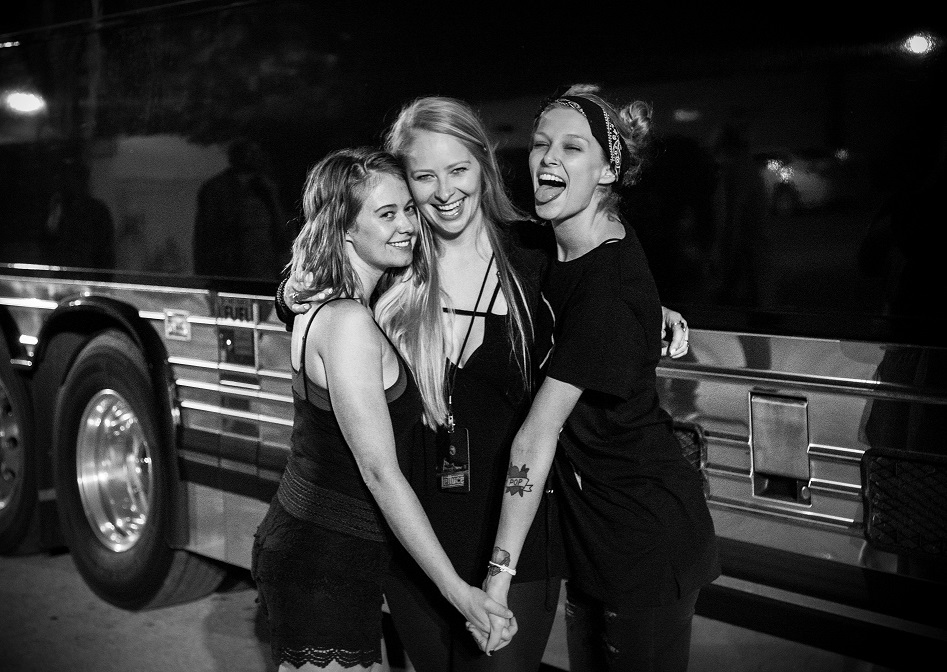 When Maddy O’Neal initially came to me with the idea of going on tour with her, Chloe Casey, and the Lettuce team, I had no idea what to expect. I had never been on the road until now, not to mention I haven’t even been working in the music industry for a whole year yet. I felt an overwhelming sense of excitement, honor, nervousness, and pride. Hell yah, I wanted to go crush these couple of weeks with two other boss ass women, in addition to the dudes from Lettuce. I knew immediately this would be an adventure full of learning and growing.  CF

With butterflies fluttering in my throat from my belly I boarded a plane, never to be the same again after I returned, for I was embarking on a musically fed tour. Accompanying Maddy O’Neal alongside my co crew mate Cait Falc, we stepped into the unknown with legends, the band Lettuce. Arriving in the baggage claim during our first stop, Charlotte, NC, we found ourselves surrounded by crew and band members as the vibes and energy continued to build with the anticipation of this tour. CC

First night of terr (tour) started out in Charlotte, NC. Not really sure what to expect still, obviously. New roles, new cities, new venues, new friends! The first night was quite the success. The turnout was huge and plenty of homies rolled through. We immediately felt welcomed into the Lettuce family as well. Post show we got to hang with everyone and have some bonding time. Jesus pulled out his Spirit Animal cards and everyone picked a card. It was surprisingly accurate! CF

The first show at The Underground in Charlotte, NC was a solid kick off. We met and connected with the band mates and crew we didn’t know prior and caught up with our friends within the band. CC 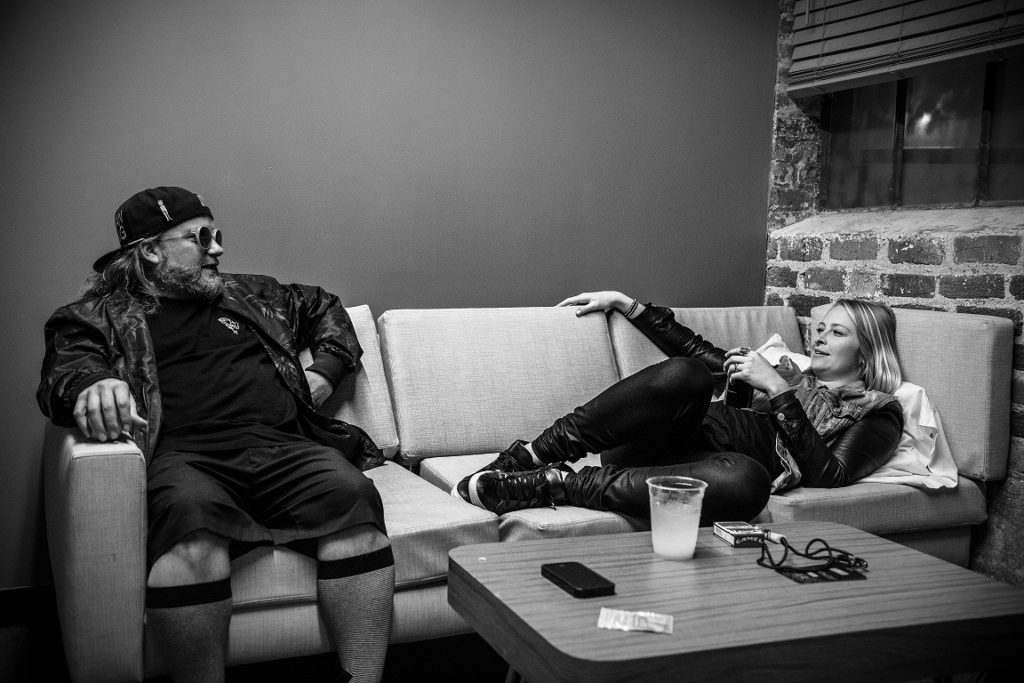 Jesus Coomes of Lettuce and Maddy O’Neal at The Underground in Charlotte, North Carolina

After the show we hung out in the bus and listened to the live recording of the show with the band. Lettuce gets creative with bits of improv during their songs and listen together after to dissect the show, it truly is inspiring. We indulged in camomile tea and tarot cards with Jesus, while watching Herbie Hancock and conductor bugs bunny videos. Creating memories on the bus when we could was magic. CC

Our crew split off from the Lettuce crew for nights two and three where we ended up at a friends mountain house in North Western North Carolina! We had such a great time up there relaxing, eating food, exploring the beautiful area, and playing with three cutie patootie pitbulls. Definitely got some serious bonding time in and had a ton of fun. Chloe and I have even been working on a dope video featuring the beautiful Maddy O’Neal, so keep ya eyes peeled! CF 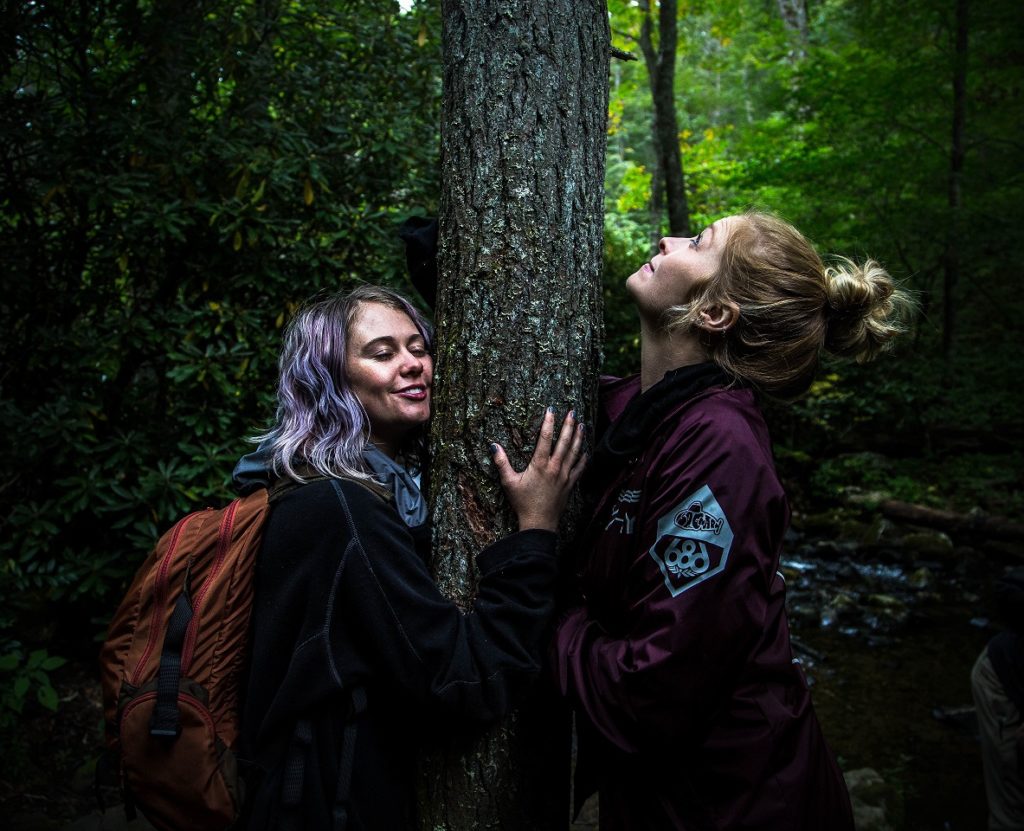 Chloe and Maddy between days off in North Carolina

We rented a car so having our own vessel meant easier veering off for adventures within our off times. After Charlotte we had two nights off and we so graciously accepted an invitation to some friends cabin in the NC mountains (thank you so much Will and Tim). We had a relaxing adventure amongst ourselves and our lovely hosts (including the sweetest rescue pits Lupin, Pixel and Finn). We indulged bonfires, hot tubbing, libations and scrumptious food, including the best quiche I have ever had made fresh by Tim. Our exploration itch was successfully scratched with a hike to a waterfall in the lush national forest that lies just outside of their property. CC

In Pittsburgh, PA, I ran into an older gentleman outside the green room asking if I was Maddy O’Neal. I explained I was not Maddy but was part of her crew. This older guy had to have been in his 60s. He told me that he had seen videos of Maddy on YouTube and listened to her on Spotify but had never seen her live. He went into detail about how her music made him feel, and how he was looking forward to experiencing her ‘contagious energy’ in person. He then went on to how he thought her live performances depicted a vibe that is so “energetically invigorating”. We parted ways and he told me he looked forward to seeing Maddy and her team continue to grow! It was so amazing to hear someone from a different generation speak about Maddy’s music, persona, energy, and performance. On this tour we’ve had the pleasure of sharing venues with the Lettuce crew and they bring out a large variety of people which is really awesome to see, and Maddy’s music is always a hit with new listeners. CF

The Rex Theater in Pittsburgh was a rocking stop. Grey Area Production is remarkable and stocked us up in badass “may the funk be with you” gear. We had a piano in the green room so Benny and Zoidis joined us for a little jaunt around on the piano while sharing tastes of their natural wine selection of the evening. When the show commenced we had some time before bus call so we wandered a few blocks down the road to a tiki bar, decorated to the nines with warm island vibes, we sipped tequila and danced while a dj spun vinyl. CC

The Higher Ground in Burlington, VT has dream staff and hospitality, boasting a full kitchen we arrived to trays full of delicious and healthy food to refuel ourselves. The entire staff was a tight knit team who showed support and comfort with ease. Since we knew some friends that lived here we got to experience even more hospitality of the town itself. The lovely songstress Michelle Sarah showed us around town with her sweet chocolate lab, Lyric. Creativity sparked with her and Maddy and I look forward to enjoying what they create. 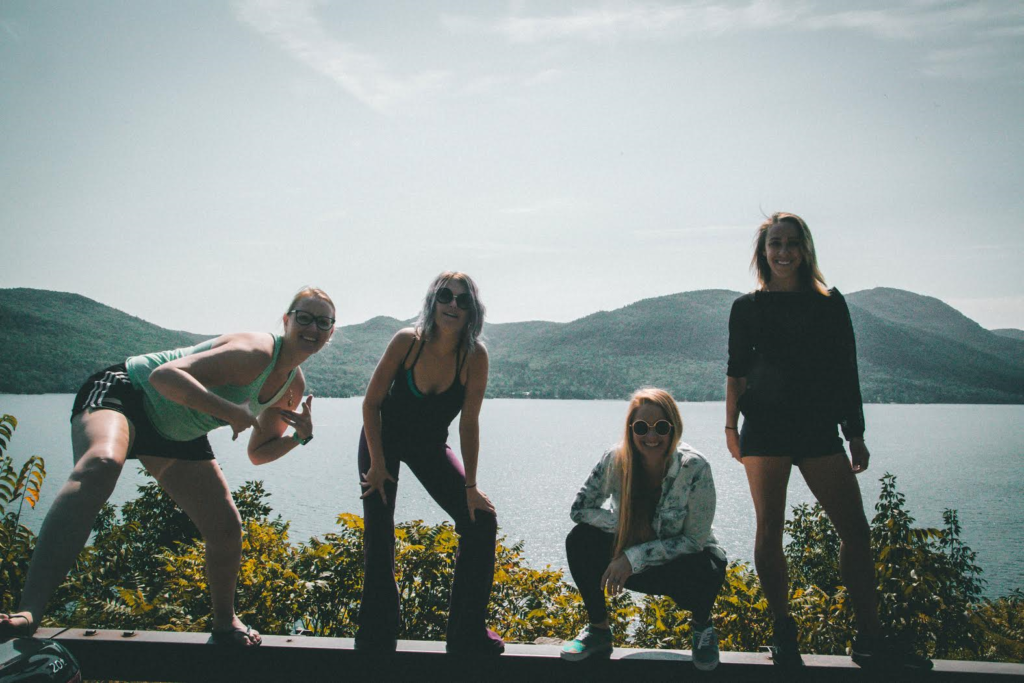 Caitlin and Dalia adopting the crew on the road

Lettuce had a few festivals to play after Burlington and Maddy got booked to play with Pretty Lights In New Hampshire during this time. With sweet synchronistic bliss we ventured the drive between Burlington and New Hampshire with a pit stop at our friend Caitlin’s house and had a sleepover with her and another friend Dalia. We absolutely loved getting adopted in between stops. It not only saved us hotel money but we got to spend time with our friends that live elsewhere in the country. A huge thanks to everyone that contributed in our journey. 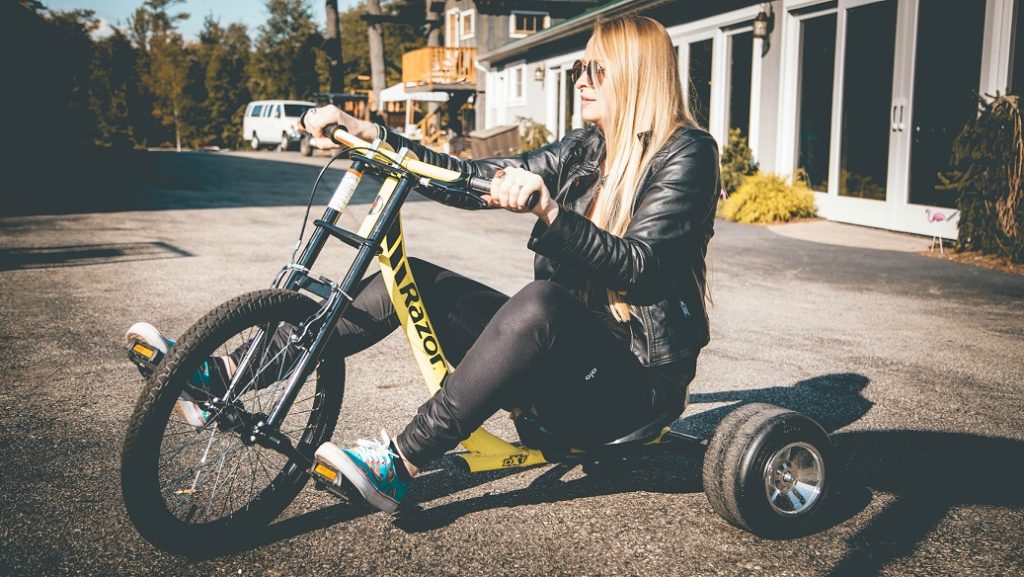 The Pavilion in New Hampshire was hands down the most amusing stop as far as toys and games go. The back stage area of the venue had bikes, scooters, bouncy house, life size chess, basket ball, volley ball and a pool! I had also heard about the 5 star catering from Pretty Lights crew in the past and it did not disappoint. From an entire paddle boat filled with ice and all the seafood you can imagine to steak, delectable veggies and all of the fixings. The favorite bartender (Mark) tending the backstage bar making delicious “MarkGaritas” and other libations was friendly and lively. I was ecstatic to receive gear from them as well such as a “Sex, Drugs and Lobster rolls” shirt to a camp Lake Winnipesaukee water bottle which they give out for artists and crew to be able to be more sustainable on the road. Points!

The New Tralf in Buffalo, NY was thrilling with an energetic venue filled to the brim with dancing patrons.  The band travels with a grill and had gotten some quality meats donated to them by a fan, which we also reaped the benefits from. Between Buffalo and Memphis we had a super day of bonding, chatting with the band and crew about life and all of the beauty within while Zoidis grilled up a delicious multi-course dinner. We developed meaningful connections that will last a lifetime.

Time was very different on tour. Sometimes it flew by and others time stood still. I learned and grew in so many ways as well as cycled thru all of the feelings and combinations of emotions i didn’t even knew existed. I succeed, failed, lost things, found things, felt in my head and out of place, screwed up … but most of all, I became inspired. 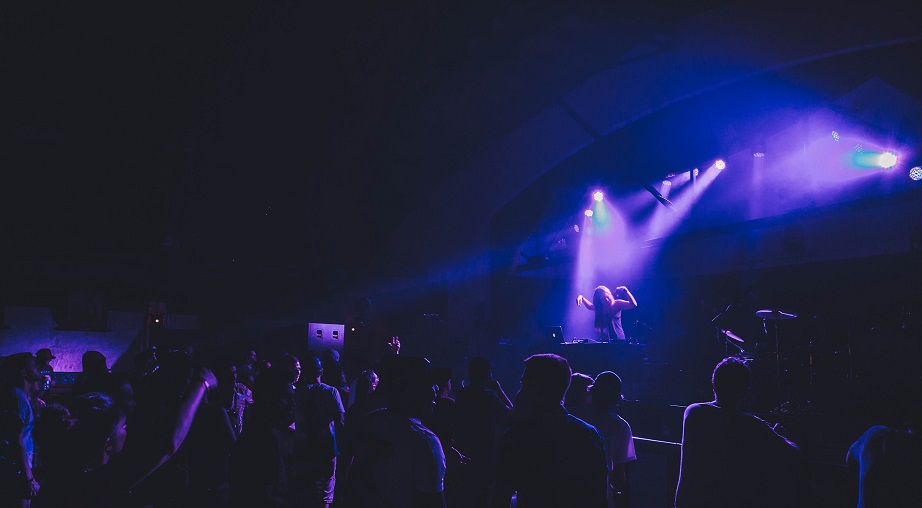 The southern and last leg of our journey was bittersweet. We roamed the sparkling streets of Memphis feeling the blues history seeping out of the walls and swirling around us. We got adopted by our friend Brock’s parents (thank you Laura and Bubba). Waking up to savory smells of the chicken pot pie casserole Laura made us after catching up on sleep was divine.  Our last few stops seemed to fly by from The Rev room in Little Rock to the legendary Cains Ballroom in Tulsa, where we were joined by friends with the above and beyond amenities in Cains green room stocked full of novelties. We first hand experienced Adam Deitch’s ping pong skills while listening to the full selection of records in house. CC

Throughout this tour we have learned a lot. Working in the music industry isn’t for the meek; and as women in the industry there are certain challenges that we have and will continue work hard to overcome. Thankfully, everyone has been really supportive and respectful, and we hope that will always be the case. I am super appreciative to be dubbed as one of the members of this crew and we have all been working our asses off to make sure everyone knows who we are, what we’re about, and what we bring to the table. CF 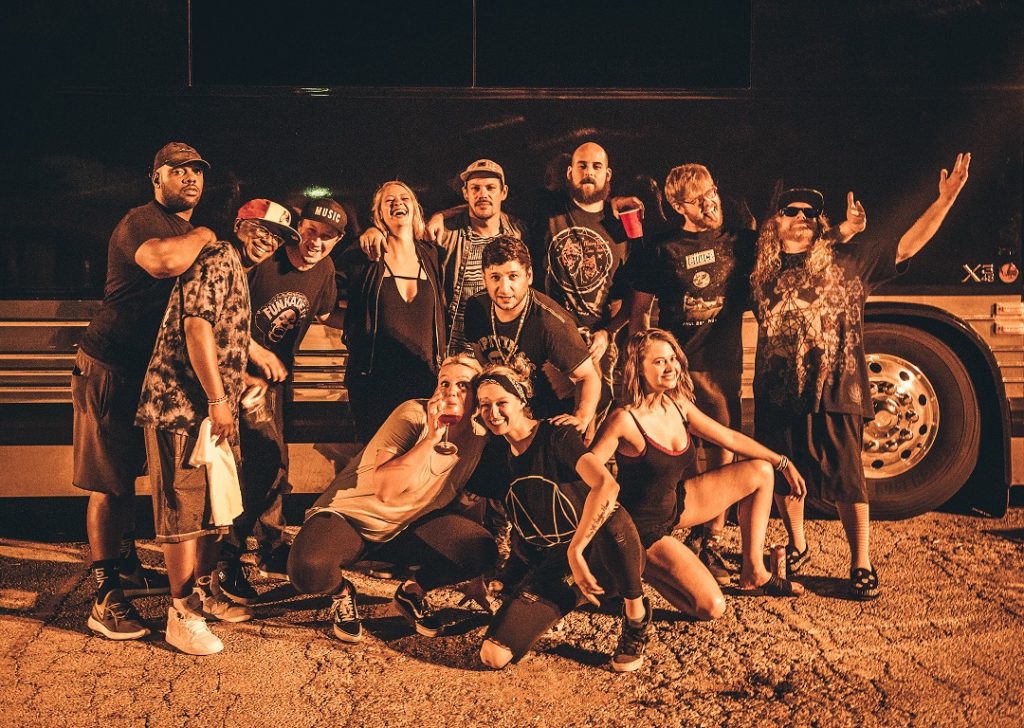 Massive gratitude to the entire Lettuce band and crew. Each and every one of them took us under their wings and guided us in a self discovery sort of way. From telling us how to open and lock the bus to detailed professional skills we became more enlightened with every stop. So much love to the band members, Eric “Jesus” Coomes, Adam Deitch, Eric “Benny” Bloom, Ryan Zoidis, Adam “Shmeens” Smirnoff, Nigel Hall and percussionist Lamar, who joined us for the southern leg. The crew absolutely crushed it, props to Beau, Blake, Hunter, Andy, Ella and the driver. Last but not least thank you to Maddy and her management for giving us a chance. I love seeing you grow and I am so grateful to be a part of the journey. we love you all. CC

Following this tour, Maddy received the most epic news of her career so far – her first headlining show at Denver’s historic Bluebird Theatre. Tickets go on sale this Friday, and the rest of her tour dates can be found below. See you on the road!