We showed up with childlike eagerness to Wonder Ballroom ready for an ultimate serenade of love-fueled lyrics, impeccable string strummin’ and a guaranteed ‘ol fashioned good time to get the soul centered. The Hill Dogs, a local Portland gritsy folk and rock staple, kicked things off into full gear and the energy filling the Ballroom was insatiable. Smiles, high fives, hugs and dance moves accompanied the The Hill Dogs’ gritty, grimy, raw and energetic playing. The sound stirring to reveal the true reason we all come together time and time and time again – the music.

Witnessing The Hill Dog’s showmanship, their true dedication to the cause of spreading the music fully comes to life when Taylor Kingman (lead vox/lead guitar), Ricky Rohr (drums/vox), Lucas Benoit (rhythm guitar/vox), Kayla Stroik (viola/vox) and Rowan Cobb (bass guitar/vox)  perform. Although they play locally quite often, this was only my second time seeing them; the first being in a quaint backyard acoustic setting, so believe me when I say what a damn pleasure it was to get down with all the production power the Wonder provides. Expect to see more from these talented cats, and be sure to check their tour dates if you find yourself in the City of Roses. 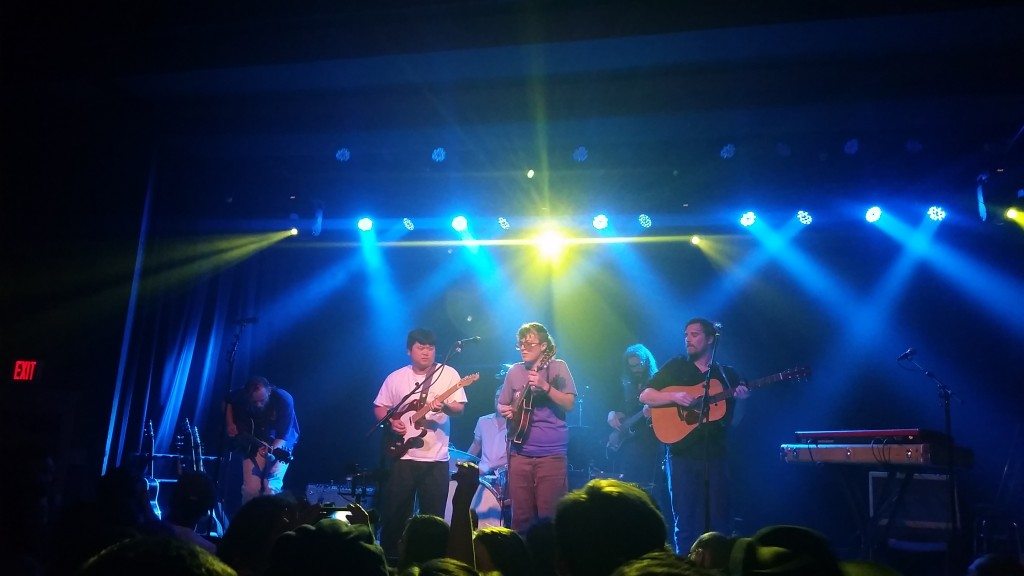 Fruition is a band that ignites your soul, stokes that inner fire and creates such a real, heart-driven harmonic sound that anyone can enjoy. The triple threat of vocals from Mimi Naja, Kellen Asebroek and Jay Cobb Anderson glued together by bassist Jeff Leonard and Tyler Thompson keeping the beat on drums and banjo, brings you back to the first time you ever heard harmonies and strumming that shook you to the core and right back out to the hairs of your skin.

They opened the night with an ode dedicated to finding your comfort in home, wherever that may be, a common theme of Fruition’s lyrics as they melodically find the comfortable balance between the longing to be a road rambler and a rooted homesteader and the love and loss that comes with it. Anderson wailed away an ovation worthy guitar solo, followed by an unrecorded song “Listen to the Sound,” written by Asebroek while driving on the open road.

Fruition gave us a spoonful more of some unreleased goodness filled with funky piano melodies from Kellen and the soulful touch of Mimi’s chords for a blues rounded tune causing the crowd to fully sink into the sound. Next up, we were treated to some straight up gospel, as the band harmonized into “Up Above My Head”. The goose bumps were in full affect and I felt like I was transported to a Southern Baptist church as we swayed and sang to the joy we all found in the room. “Above the Line” came next from the new album as Anderson and Mimi playfully conversed via guitar and mandolin, creating a conversation we were all more than eager to lend our ears to. 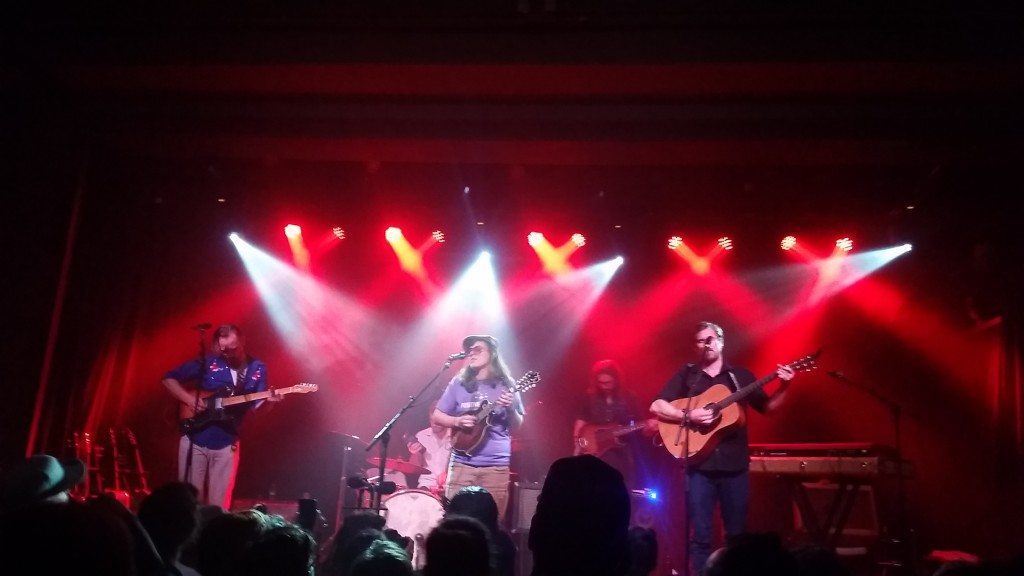 “Labor of Love,” the title track off the new album, almost brought me to tears as the gutsy, honest message filled the entire space with authentic and pure love. The crowd erupted into applause as night one guest Allie Kral from Yonder Mountain String Band walked onto to stage, violin in hand as Mimi casually remarks “We are going to steal her and take her with us”! Oh, we wish you would, but Yonder wouldn’t be too pleased, so maybe just more guest appearances and collaborations will do?! They played their soulful enticing beautiful ode to taking risks and fueling your soul off of their 2013 album “Just One Of Them Nights”, “Come On, Get In,” and then immediately busted out personal and fan favorite “Mountain Annie” to wrap up the first set of the night before a short intermission to get our feels back in order before set two.

When the band entered the stage for the second set, the energy was electrifying and I couldn’t wait to see what was up Fruition’s sleeves for this half of the show. For the first time ever live, we were graced with the new joint “The Way That I Do,” while Mimi jumped on her drum and Jay took full control of the vocals before dipping into a harmonica session followed by special guest folk rock singer-song writer Brad Parsons who joined in for “Somehow, Someway, Someday,” a song he co-wrote with the band on their 2015 album “Holehearted Fools”. The friendly appearances didn’t stop there, as The Hill Dog’s Taylor Kingman showed up on stage to sing the fun-filed folky number “Spliff” and we gladly welcomed another incredible harmonica number from Anderson.

Next up, Eric Yates from Hot Buttered Rum joined the crew with his mandolin for extra special versions of “Big Sky” and “Early Morning Wake Up”. Dave Dernovsek, who plays keys for Portland’s Yak Attack as well as The Hill Dog’s. Dave’s finger magic spilled into the soundscape through his key playing and you could see his soul slowly unveiling as his playing took us to new levels of audible enjoyment. Already blown away by the amount of surprise guests and friends joining in musical love making throughout the night, it was another amazing treat when The Hill Dog’s viola goddess Kayla Stroik came on stage, as the band broke out into their new ballad based hit “Beside You”. 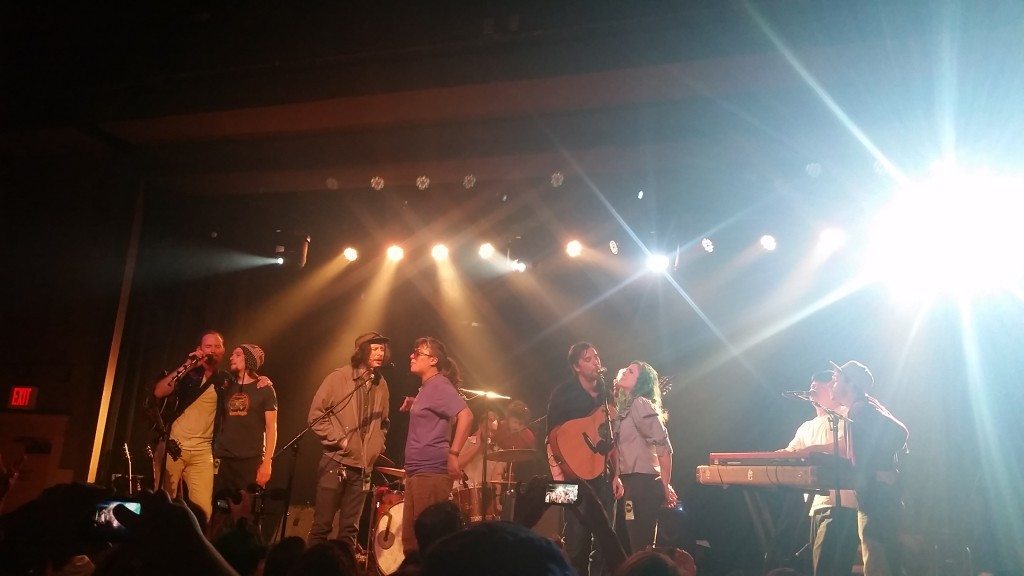 Finally, a rock and roll fueled version of folky “Death Comes Knockin’,” to remind us of all the blood, sweat and tears poured into the laborious glory that love entails. The Wonder Ballroom decided that was time enough for the band, but the crowd was NOT having it, as we all demanded an encore. After a few minutes of hooting and hollering our praises and requests for more, Fruition strolls back out while Mimi casually apologized to “Wonder Balls” for going over and calling forth The Hill Dogs and the rest of the family to join them in a sing-a-long version of their classic around the campfire hit “Meet Me On The Mountain”. As the night gradually winded over the next few minutes, the sound was cut and the band cued us to keep on keepin’ on…three rounds of beautifully a cappella’d choruses later, arms around our neighbors and friends, blissfully soaking up what was by far the best Fruition experience I have ever had.

“Labor of Love” has truly delved into the expansion of Fruition’s artistry and created a testimony to the timeless folk rock Americana sound that is hard to come by these days. If you haven’t had a listen to “Labor of Love,” jump on the wagon now, because Fruition is a love driven ride through musical paradise you do not want to miss out on. Cheers til’ next time and thanks for the magical night!