Nestled in the gentle hills of Rome, Georgia, Counterpoint Music Festival boasted one of the most musically diverse lineups of 2014. Electro-soul champ Pretty Lights opened the weekend with a beautiful set with his live band on Friday, while Boys Noize, bass connoisseur, brought his technical production to the masses. Hip-Hop giants Outkast headlined; the festival appearance was their first homecoming ATL show in nearly a decade. Additionally, renowned live-tronica act STS9 showed off their newest member, bassist Alana Rocklin. Soulful & eccentric jazz lounge masters Thievery Corporation rounded out the peerless weekend with their performance on Sunday night, and Major Lazer brought their dynamically pep rally reminiscent shenanigans to the stage as well.

Despite severe storms on Sunday leading to cancellations, and sudden illnesses wreaking havoc (both Ott. and Tourist were both forced to cancel sets), the contagious and joyous spirit of CounterPoint prevailed, and I must say, never have I experienced a festival that was able to so properly bounce back from aforementioned disasters. While the electrical storm raged on for nearly two hours, campers secured themselves in cars until announcements were made, allowing attendees to enter the festival gates again. Most of the crowd despaired, figuring no make up sets would be made and that the end of the fest was coming to a close much earlier than expected. Alas, sooner than we’d thought, the venue was opened and schedules had been re-adjusted.

Getting into the artistic side of Counterpoint, there was absolutely no shortage of the amount of super rad vendors. One of the booths that stood out in particular was the BL Visuals booth. Did you happen to see people running around with crazy body-painted sleeves? These awesome festie heads were coming straight from the BL Visuals booth! This was some of the craziest shit we’ve seen. What better way to romp around a festival in style than to be covered in paint? Words can’t describe. Check out this super rad video above showing exactly how they do what they do. 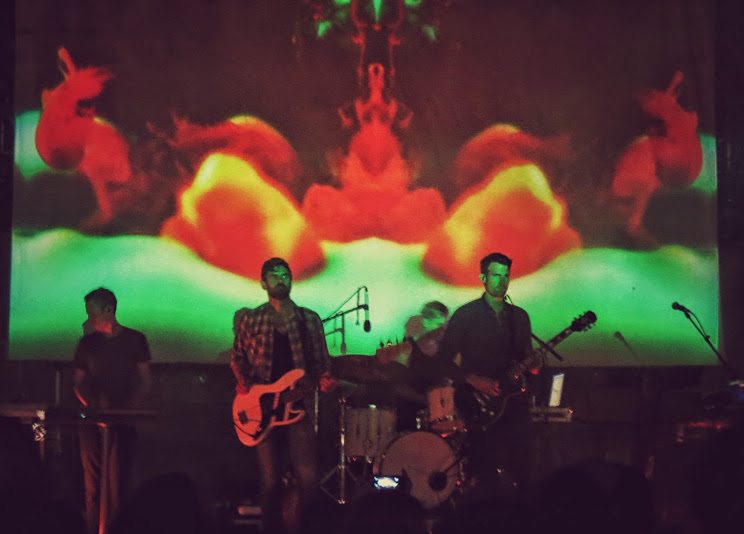 There are few musical delicacies in life that are as sweet as Tycho – the mind numbing, harmonious sounds of Scott Hansen. Backed by a live band during this appearance, the group created a luminous and dream-like world for fans to drift in and out of, beautifully accompanied by Hansen’s heartening graphic visual backdrops and stage light ambience. The geographical mindset that Tycho conveys through sound is breathtaking, redolent of spring meadows, insightful sunrises and awe inspiring ocean waves under a beaming moon. Performing each song as though it were the next sequence of a grand symphony, Tycho gave an emotionally powerful and heartfelt show to close out the last day of the festival.

The festival totem pole is more than a common sight at music gatherings – it’s a staple. Yet, the amount of elaborately designed totem poles that we saw being shown off in the crowds at CounterPoint were of the highest proportions, and truly called out for recognition. Of course with awesome totem poles come awesome people; the folks who camped at CounterPoint were some of the best neighbors I’ve had to date. Your environment makes your experience – and the celebratory festive spirit was definitely strong throughout the weekend. Each stage was surrounded by a massive sea of artistic and bold totem festie poles, nearly contending with the performers for the spotlight. We saw mushroom fairy giants, ‘Doge’ proclaiming his love for Big Gigantic, Oprah Winfrey, Rick Ross, and of course, the infamous unicorn tooting saxophonist, just to name a few. There’s nothing better than having a passionate festival crowd to immerse yourself in this unique culture. 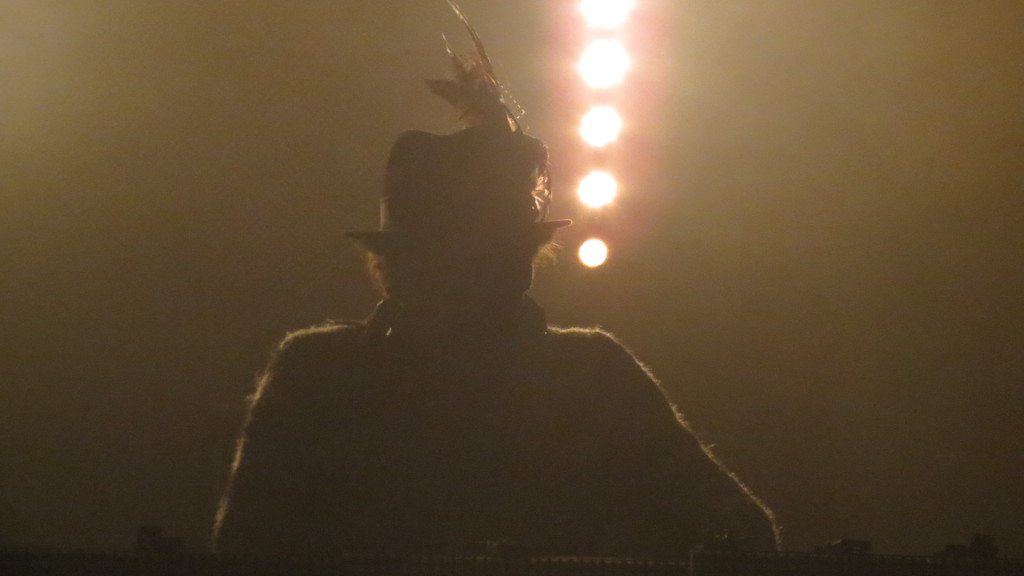 When Ott. unexpectedly fell ill on Saturday night, concert goers buzzed with wonder as to what would be done to fill the two and a half hour gap that had now opened up. Answering festie head prayers, Simon Posford, aka Shpongle, rolled up his sleeves and, rocking his infamous pheasant feathered hat, had the crowd exuberant and dancing for the entirety of his set. In between bouts of silence, thousands of fans could be heard screaming their love and gratitude for Simon, as I overheard one fan proclaim, ‘Posford you’re a God!’ followed by ‘I can’t believe he’s playing this long for us’, by others within the vicinity. The reactions he conjures from his crowd are of mind boggling proportions; for the length of any set he plays, there is never any doubt that all eyes are frenetically set on Simon Posford. 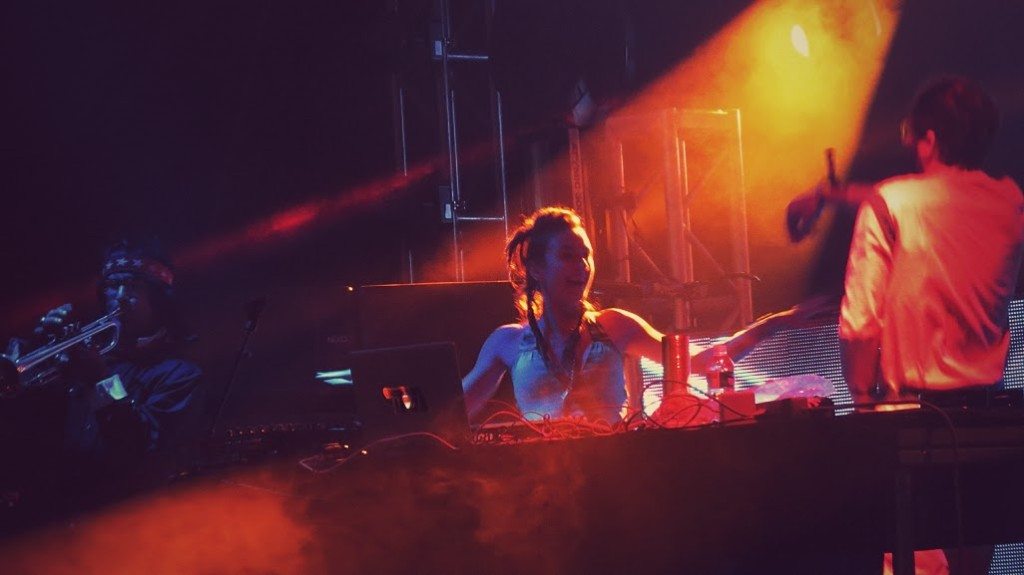 You can always tell when TPA is near by based on the number of surrounding individuals who happen to be rocking onesies and jumpsuits, a signature trademark of this ebullient performer’s awesome live shows. Although Liminus, Polish’s live visualist was greatly missed during this set, the beautifully intimate stage chemistry was still present with the company of vocalist Ayla Nereo and trumpet player SaQi. The live performance of soul-warming vocals and harmonizing trumpet was an enlivening and moving experience. Their vibrant smiles, grooviness and talent only accentuates the entire rainbow spectrum of the funky-discoesque Polish show. If you ever get the chance to see this trio perform together, it is a must.

Jake Atlas and his Berkley homegrown experimental bass brought the party to the Underground stage on Saturday, as he collaborated live with captivating dance crew Dragon House, whose ultimate precision and skill had the crowd’s eyes glued to the stage. Admired for his organic and technical glitch productions, Thriftworks has never left a crowd upset, and most definitely raised the bar for his shows to come. Complimenting Jake’s tasteful tracks were key dancers from the Dragon House gang, including BluPrint, Nonstop, Cordaro, GG and Chibi. 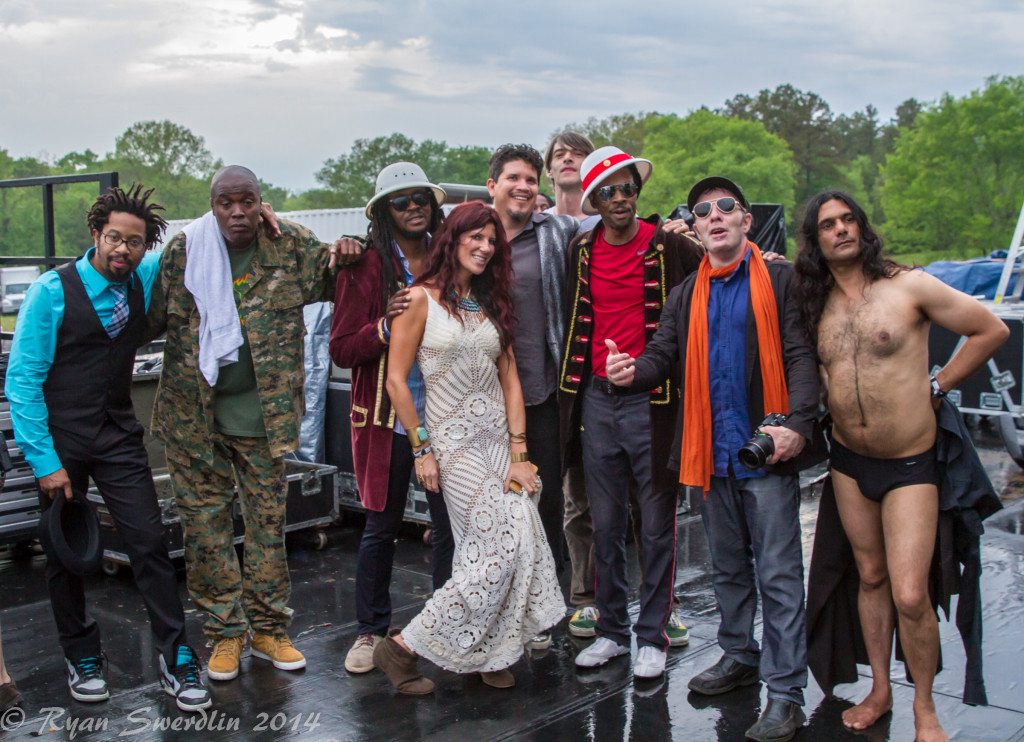 As I mentioned before, the storms that rolled in mid-evening on Sunday led to a few cancellations and minor changes to sets, those of which included bossa nova, worldly infused funk band, Thievery Corporation. Although their performance time had been compromised by the schedule, their live show was none the less a signature and stunning display of Middle Eastern and Brazilian influences, all tastefully balanced with the unique proficiency of each member on stage. With the storms ending just before their time slot, The Thieves sprang into action and did not disappoint. Parisian singer LouLou Ghelichkhani lent her heavenly vocals to tracks such as ‘Take My Soul’, while Shana Halligan made her debut with the Thievery classic ‘Lebanese Blonde’. This being their first show on tour of their newest release, Saudade, the energy was phenomenal, as fans cheered, jousted totem poles and shouted back lyrics. One moment in particular stood out as bassist, Ashish Vyas stripped down to his briefs, riling the crowd into a hype, and then went on to successfully roll into a frontflip on stage, all while never missing a single strum of his bass. 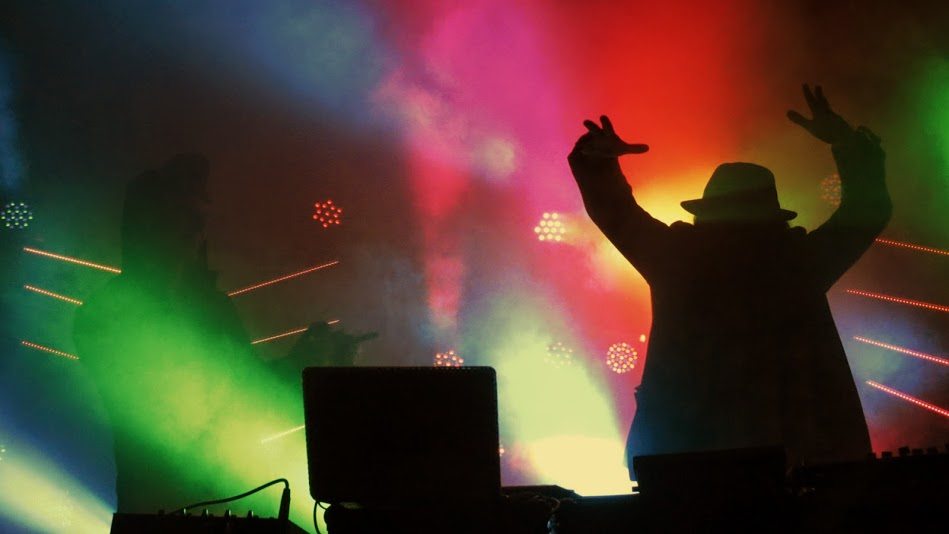 Undoubtedly the loudest silent disco I’ve ever been apart of, Sunday night’s after party by Fallen Tree Silent Productions began after Tycho’s set closed out the main festival at 2 am. Maxing out their 1,000 person capacity all three nights of the fest, the third and final showdown on Sunday unquestionably served as the ultimate party headquarters. Pairing up their distinctly glitchy jazz and soul tingling techniques, Michal Menert and GRiZ (AKA: Grant Kwiecinski) had the dance floor loaded with booty grindin’ flirts and totem waving bros. Celebrating tour manager Benjamin Schroeder’s birthday, the ‘Detroit Bad Boys’ were in full effect as Menert and crew shouted birthday wishes throughout the set, and also had some majorly heart touching PDA when a group hug broke out on stage. Waving a large ‘Detroit Bad Boys’ flag, the energy was definitely at one of the highest it had been all weekend. Following the two off the booth was Thievery Corporation’s own Rob Garza, spinning his nu-disco and Afro-funk influenced deep house. With a full house present, the silent disco was anything but, with shouts from the crowd competing with the headphones. Even those outside of the gates raged on, dancing to the internal beats inside their bodies and embracing the intense energy in the air that night. Rounding out the night was an ultimate surprise set from Santa Cruz born producer Christian Bauhofer, aka Minnesota, who had been set to play the festival but had his early set cancelled due to the storms. Taking the stage around 3:30 am, he played until the sun threatened its beams, and winded the party down correct with his ambient and uplifting tracks. 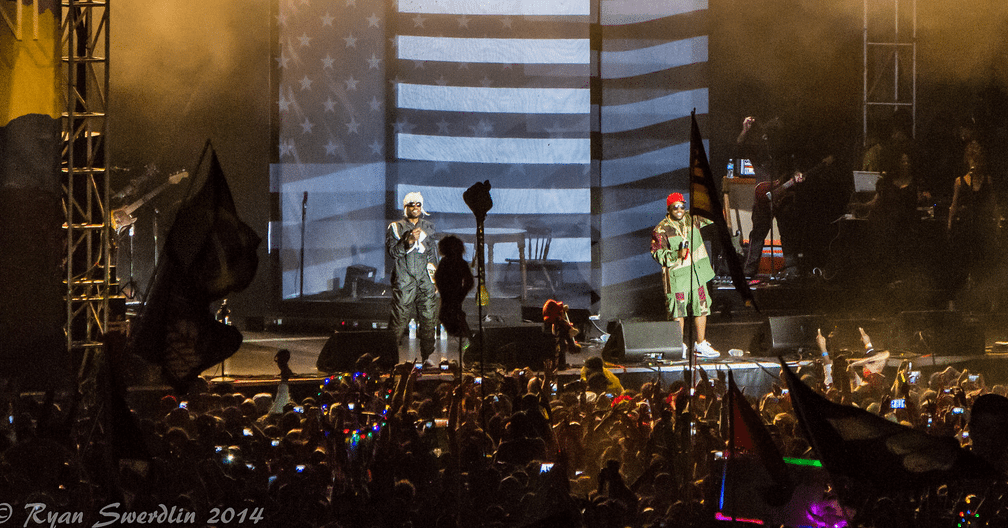 1. Outkast Homecoming Show / The Best Seats in the House

Following the sea of lackluster reviews OutKast received at last month’s Coachella, Andre3000 and Big Boi don’t seem to be the types to let simple criticism get under their skin. Which is why I’m crediting their outstandingly stellar performance on Sunday night to the very real love of throwing it down for their hometown. As electrical storms loomed over the land at CounterPoint, the weather conditions threatened to shut the last night down altogether, bringing to mind the classic OutKast line from ‘Ms.Jackson’: ‘You can plan a pretty picnic, but you can’t predict the weather’. Fortunately, the festival Gods were smiling upon us as the skies opened up just on time for the duo to perform nearly two hours of authentic Southern hip hop, breaking out several tracks from a range of albums. Rather than battling through the frenzied crowd and risking a painful death by stampede, I opted for a better view of the majestic show, but where could this be found? As with a multitude of other things, my friend Rob Myers, sitar player of Thievery Corporation, had the answer. Ignoring tour manager guidelines (everyone came out alive, so I’ll assume this is fine to report), Rob, myself, Thievery photographer Ryan Swerdlin and other members of the band (Ashish & Jeff) proceeded to climb the top of the tour bus, where we secured ourselves a most beautiful view of the shenanigans happening on the Freedom stage for Outkast. 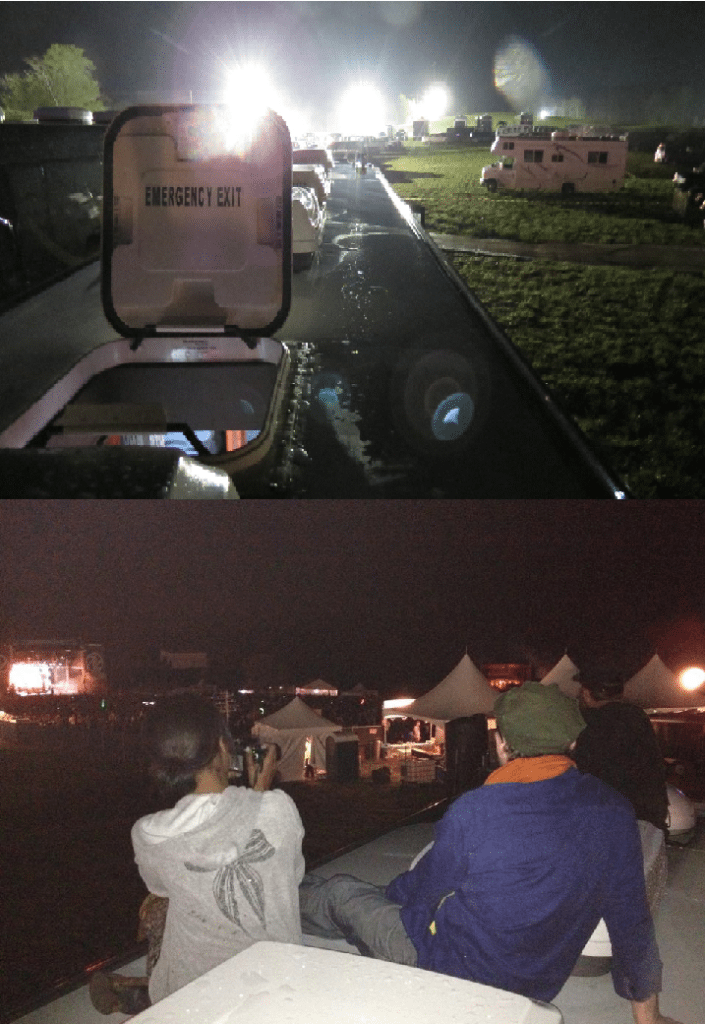 Yes these were taken with a cell phone, but that’s okay. Rob and I taking in the view!